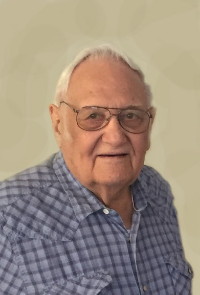 Raymond M. Richard, 90, peacefully passed away on Sunday, February 16, 2020 at Helping Angels Home Care in South Bend, Indiana. He previously was residing at the Sanctuary at St. Paulâ€™s retirement community, in South Bend. Born in Argos, Indiana on February 21, 1929, Raymond was the son of Charles A. and Agnes (Crist) Richard. He graduated from Argos Community High School with the class of 1947. He proudly served our country during the Korean War in the U.S. Army. He married Betsy Coswell and had 9 children. Before retiring, Raymond was a truck driver for Interstate Motor Freight of South Bend for over 25 years then for Roadway Express for five years in Elkhart, IN. He was a long-standing member of the Teamsters Local Union #364, and was a committed attendee of their retiree group throughout the years.
He was an active member of Holy Cross Catholic Church in South Bend. He was a past president of Harvest House, volunteered at the Holy Cross food bank and the Saint Vincent DePaul in South Bend stocking and delivering food to those in need. He especially enjoyed his gardening, traveling, attending plays and concerts, various functions, both work and family related. Raymond’s true love was his family and all the years of memories he was able to make with them. He enjoyed vacationing and shared that experience with his children and siblings, taking them on many trips including ones across country to Arizona, California, and Oregon. He was known for his fun and easy-going nature. He made many friends at his retirement home playing cards and bingo, and faithfully working in their store. In his younger years, he was known for his strength and balance; doing cartwheels, walking on his hands from the beach to under the water, and balancing babies in the palm of his hand. Raymond is survived by his children: Gregory Richard of South Bend; Jeffrey Richard of Portland, OR; Lee (Bill) Reck of St. Joseph, MI; Randall (Amy) Richard of Somerset, WI; Patricia Heynacher of South Bend; Lisa (John) Treacy of Granger; Pamela Eskue of Fallbrook, CA; Eric Richard of South Bend; and Matthew Richard of Mishawaka; 23 grandchildren and 12 great-grandchildren.
Also surviving are his siblings, Lewis Richard, of Plymouth, IN and Julianne Stevenson, of Deming, NM as well as many beloved nieces and nephews.
He was preceded in death by his parents, and 5 of his siblings; sisters Martha Barker, Liola Davis, Lucy Schlosser; and his brothers Joseph Richard and Robert Richard
Visitation will be held on Monday, February 24, 2020 from 4-7 at the Johnson-Danielson Funeral Home, 1100 N. Michigan Street, Plymouth. A Rosary will be recited at 7 p.m.
Mass of Christian Burial will be held at 11 a.m. on Tuesday, February 25, 2020 at St. Michael Catholic Church, 611 N. Center Street, Plymouth with Fr. John Korcsmar, CSC officiating. Visitation will resume one hour prior in the church.
Burial will follow in the New Oak Hill Cemetery, Plymouth, with Military Honors provided by members of the American Legion Post 27, Veterans of Foreign War- Marshall County Post 1162 and Disabled American Veteran Chapter 42.
Memorial contributions can be made to the St. Vincent DePaul Society Center, 520 Crescent Ave, South Bend, IN 46617.