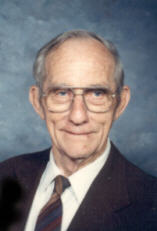 Lifetime area resident, Raymond “Ray” Leroy Davis, 93, of Klinger Ave., Plymouth, died of natural causes in Pilgrim Manor Nursing Center at 1:10 p.m. on Sunday, June 29, 2003.
Born in Fulton, Ind., on March 21, 1910, Ray was the son of Frank and Edythe Walters Davis. He attended Plymouth schools.
He and Evelyn Drake were married in Fulton, Ind., on Nov. 15, 1938.
Ray was an Indiana Motor Bus driver for many years, retiring in 1975. He then took up furniture refinishing and chair caning.
When he was able, Ray enjoyed taking a walk through the park every day. After his retirement from Indiana Motor Bus he was the first driver for REAL Services.
Ray was a member of Trinity United Methodist Church. A longtime member of the Wally Byam Airstream Club, he was a charter member of the Plymouth Lions Club.
Ray is survived by his Evelyn, a loving wife of over 64 years and by their two daughters and a son-in-law. The daughters and their husbands are: Judy and Bob Trier, Kendallville, Ind., and Teressa and Tom Welborn, Argos, Ind. David Hoffer, Sr., son-in-law, living in Ill., also survives.
Eight grandchildren and eight great-grandchildren survives as well, together with two brothers, two sisters and three sisters-in-law. They are Mabel Parsley, Springfield, Mo., Mary and Earl Allison, Florida, John and Francis Davis, Plymouth, James and Louise Davis, Grand Rapids, Mich. The sisters-in- law are : Mary Davis, Argos, Ind., Elberta Davis, Plymouth, Ind., and Francis Davis, South Bend, Ind.
Ray was preceded in death by his parents, a daughter, Carol Charlene Hoffer and three brothers, Herman, George and Vachel Davis.
Visitation will be in the Johnson-Danielson Funeral Home, 1100 N. Michigan St., Plymouth, on Wednesday, July 2, 2003 from 4 to 7 p.m.
Funeral services will be held at 10:30 a.m. on Thursday, July 3, 2003, in the funeral home. The Rev. William Kaster, pastor of the Trinity United Methodist Church, will officiate.
Burial will be in New Oakhill Cemetery, Plymouth.
Gifts in Ray’s memory may be made to the Alzheimer’s Association or the Trinity United Methodist Church Elevator Fund.