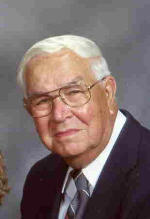 Lifetime Plymouth resident, Raymond W. Ullery, 85, died of natural causes on Thursday, August 9, 2001, at 4:08 p.m. in Memorial Hospital, South Bend. He was born the son of Frank P., and Marjorie Ross Ullery on June 9, 1916, at home in Tyner, Ind. Raymond attended Tyner High School. On October 24, 1937, in Plymouth, Raymond and Cecile I. Markley were married. Raymond was a lifetime member of the Church of the Brethren, most of those years at Plymouth. A transporter for Redman Homes Inc. of Topeka, Raymond retired in 1978 after 16 years on the road. He previously had worked for Skyline Corporation. His hobby, like his vocation, was trucks and cars. Raymond enjoyed traveling and dinner dates with his wife of nearly 64 years. That love for driving took them to most every state in the Union. He was an outdoorsman and no stranger to yard work. Raymond is survived by Cecile, his wife, their two sons, Larry W. and Barbara Ullery, Hallsville, Texas, Randy E. and Joanne Ullery, Bremen, Ind., and a daughter, Judy R. and Rod Miller, Plymouth. A grandson and three granddaughters also survive. They are: Richard and Dawn Ullery, Bremen, Melinda and Kyle Hawkins, Valparaiso and Cari Miller and Kenzie Miller, both of Plymouth. Four great grandchildren and two sisters, Lelah Hendry of North Manchester, Ind. and Dorothy and Howard Mitchell of Rochester survive as well. Raymond was preceded in death by his parents and a brother, Lester Ullery. Visitation with the family will be on Sunday, August 12, 2001, from 3 to 7 p.m. in the Johnson-Danielson Funeral Home, 1100 N. Michigan St., Plymouth. Funeral services will be held at 11 a.m. on Monday, August 13, 2001, in the Plymouth Church of the Brethren with visitation one hour prior to services. The Rev. David Kerkove, pastor of the church, will officiate. Burial will be in Oakhill Cemetery. Memorial gifts in Raymond’s memory may be made to the Plymouth Church of the Brethren.