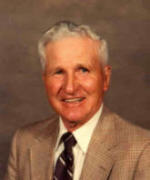 Remie C. “Ray” Maenhout, 82, 9722 1st Road, Bremen, Ind., died, following an illness, on Tuesday, Feb. 12, 2002, at 2:30 p.m. in Miller’s Merry Manor, Plymouth. Ray had lived in Bremen since 1961, coming from South Bend. He was born on Dec. 3, 1919, in Walkerton, Ind., the son of Emiel and Pharailde Roegiers Maenhout. He graduated from Greene Township High School in St. Joseph County. During World War II, Ray served in the United States Army and was stationed in Japan. On Aug. 23, 1947, at the Sacred Heart Catholic Church in South Bend, Ind., Ray and Elsie M. Vervynckt were married. A farmer, he also had worked at Bendix in South Bend and at Wells Aluminum in North Liberty. He enjoyed fishing in local lakes and also did some hunting. A Cub baseball and Nortre Dame football fan, he enjoyed watching their games. He was a member of St. Michael’s Roman Catholic Church and Farm Bureau. Ray is survived by Elsie, his wife of 54 years, and their son and daughter-in-law, Russell and Patty Maenhout, all of Bremen. Two grandsons and a granddaughter also survive. They are: Ryan and Jessica Maenhout, Kevin Maenhout and Angela Maenhout, all of Bremen. A sister, Valeria LaCluyse, Mishawaka, survives as well. Ray was preceded in death by his parents, a daughter, Marsha Maenhout and by three brothers: Marcel, Noel and Alfred Maenhout. Two sisters, Margaret Van Driesche and Rachel Van Driesche have also died. Visitation with the family will be from 4 to 8 p.m. on Thursday, Feb. 14, 2002 , in the Johnson-Danielson Funeral Home, 1100 N. Michigan St., Plymouth. A Rosary Service at 8 p.m. will follow visitation. Mass of Christian Burial, officiated by the Rev. Father Anthony Gillespie, pastor of St. Michael’s Roman Catholic Church, will be held on Friday, Feb. 15, 2002, at 10:30 a.m. in the Church, 625 N. Center St., Plymouth. Burial will be in New Oakhill Cemetery, Plymouth. Memorial gifts may be made to St. Michael’s Church.