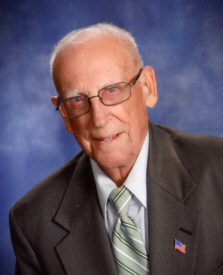 Rev. Don. E. Grandlinard, 103, entered into his eternal life and the arms of his heavenly Father early Monday morning, May 9, 2016, at his residence. Don was born August 30, 1912, in Adams County, Indiana, to the late William C. and Ica (French) Grandlinard. He graduated from Adams County High School and Marion College. On June 6, 1936, Don married Mary Kathryn Rittenhouse in Portland, Indiana. Together their Wesleyan ministry took take them to the Indiana communities of Peru, Huntington, Valparaiso, Richmond, Anderson, Plymouth and Logansport. When he retired in 1976, they made their home in Argos, Indiana, and were actively involved in the Argos Wesleyan Church. After Mary’s death, he married LaVerta Hartman, and they attended Plymouth Wesleyan Church. Surviving is his wife, LaVerta Grandlinard, of Argos and her children Julie (Mike) Campbell of Argos, Indiana, and Darryl (Libi) Hartman of Plymouth, Indiana; his son, Paul (Janet) Grandlinard of Mendon, Michigan, and two daughters, Helen (John) Henson of Pleasanton, Texas; and Anita (Gary) Berger of Plymouth, Indiana. Twelve grandchildren, numerous great-grandchildren and great-great-grandchildren survive as well. Also surviving are 2 siblings; Glen (Beverly) Grandlinard of Lynn Grove, Indiana, and Joyce (Claren) Gering of Bluffton, Indiana. He was preceded in death by his first wife, Mary Kathryn, four sisters, and five brothers. A celebration of Don’s life and sharing of memories with his family will be on Thursday, May 12, 2016, from 4:00-7:00 PM at the Johnson-Danielson Funeral Home, 1100 North Michigan Street, Plymouth, Indiana.
A graveside service for Rev. Grandlinard will be on Friday, May 13, 2016 at 11:00 AM at the Maple Grove Cemetery, Argos, Indiana, with Rev. Jerry Felts officiating. Memorial contributions may be given to the Center for Hospice and Palliative Care, 112 South Center Street, Suite C, Plymouth, Indiana 46563.