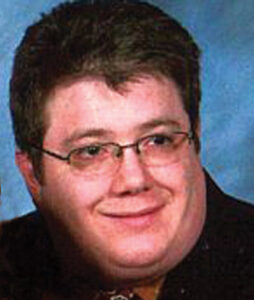 Rev. Matthew Walter Pickut died on August 6, 2015 at a nursing facility in Carmel, IN due to complications from a brain injury that resulted from a strep infection.
Matthew was born on October 29, 1973, in New Jersey to his parents, Walter W. and Patricia (Winter) Pickut. He graduated from Taylor University in Upland, Indiana in 1996, earning a Bachelor’s Degree with majors in Sociology and Bible. He married Barbara (Blackford) Pickut on July 5, 1996. Matthew began his career in ministry as the Youth Minister for Flora and Bringhurst United Methodist Churches. He went on to serve as a Student Local Pastor at the Monon United Methodist Church, where he served for 7 years while attending Associated Mennonite Biblical Seminary. He obtained his Master of Divinity degree from AMBS in 2008. In 2007, Matthew came to Plymouth First United Methodist Church, where he served as Associate Pastor until his illness in February 2012. He also had the privilege of helping coach the Plymouth Community Schools speech and debate team. Matthew loved Jesus Christ and found joy in serving Him. He sought to share truth in a way people could relate to, to reach out to those who did not identify with the church, to help people recognize the work of God in their lives, and to encourage others to discover and use their gifts. He was interested in a wide variety of topics and was an avid reader, particularly enjoying the work of G. K. Chesterton. He was also an enthusiastic sports fan who covered Arena Football games for a website for a period of time. Matthew is remembered for his humor, his intelligence, his joy in his daughter, and his love for others.
He is survived by his father Walter Pickut and wife Nancy (Juriga) of Jamestown New York, his brother Bill Pickut and wife Rebecca (Dedo) of Northbrook, Illinois, his sister Cait Lamberton and husband Charles of Pittsburgh, Pennsylvania, his wife Barbara E. Pickut, and daughter Abigail Ruby Pickut of Plymouth, Indiana. He is preceded in death by his mother, Patricia (Winter) Pickut. Rev. Pickut’s life and faith will be celebrated in a service at Plymouth First United Methodist Church at 2:30 pm on Monday, August 10. Calling hours will be held at the church on Sunday, August 9, from 2:00 – 5:00 pm and on Monday the 10th from 1:00-2:30 pm. A graveside service will take place at 1 p.m. Tuesday, August 11 in the Lust Cemetery located near Chatfield, Ohio at the corner of Route 4 & Cary Roads.
Memorial contributions may be made to the Plymouth First United Methodist Church 400 N. Michigan St., Plymouth, IN 46563, the Plymouth Community Schools Speech Team 1 Big Red Drive, Plymouth, IN 46563 or the Indiana Assistive Technology Act (INDATA) Project at Easter Seals Crossroads 4740 Kingsway Dr., Indianapolis, IN 46205.