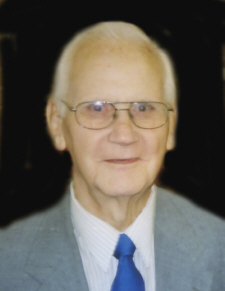 A good and faithful servant, the Rev. Robert Wesley Klatt, 86, received his Heavenly reward at 2:45 p.m. Wednesday, April 16, 2008 with his wife at his side. Robert died of natural causes in the Pilgrim Manor Care Center, Plymouth. A resident of 10201 8A Road, Plymouth, he first moved to this area from Chicago in 1968.
He committed his life to preaching the Word of God and leading many to Salvation.
Robert was born on August 13, 1921, in Oxford, Nebraska. He was the son of Fredrick Ludwig and Ella Caroline (VanManteuffel) Klatt.
He graduated from Enid (Okla.) High School with the class of 1939 and received a diploma in Theological Studies from Miltonvale Wesleyan College – Kansas in 1943. He then earned a Bachelor of Religion degree from Marion College now Indiana Wesleyan University where he then attained a Bachelor of Arts degree. From Asbury Theological Seminary in 1949 he was awarded a Bachelor of Divinity degree.
On October 26, 1946, in the College Church of Marion, Ind., Robert and Vera Ruth Stair were married by the Rev. C.C. Decker.
Robert became an ordained Wesleyan minister and pastored in Indiana, Illinois, Michigan, and New York and taught one year in the Philippines. He would retire three times. He served the Argos congregation and then, in his last paid position, the Plymouth Wesleyan Church where he was a Visitation and Seniors pastor.
He enjoyed traveling, camping and reading. A very gifted and handy person, he was a woodworker and carpenter and automotive repairman. He enjoyed the many activities of his grandchildren.
Robert is survived by Vera, his devoted wife of almost 62 years and by their three sons and daughters-in-law and grandchildren.
They are: Mark Edward and Dawn Klatt, Portland, Ind. and their children: Nathan, Danae and Kristen; Philip Dean and Martha Klatt, Warsaw, Ind., and their children, Anna and Andrew; and David Robert and Debra Klatt, Sebring, Fla. and their sons, Joshua, Samuel, Daniel and Elisha.
Two brothers also survive; Luther Klatt of San Marco, Calif. and Fredrick and Betty Klatt of San Clemente, Calif. along with numerous nieces and nephews.
Robert was preceded in death by his parents and a sister, Alberta Kindschi.
Friends will be welcomed to celebrate the life of Robert Klatt with his family on Friday, April 18, 2008 from 4 to 8 p.m. at the Johnson-Danielson Funeral Home, 1100 N. Michigan St., Plymouth, and for one hour prior to services at the church on Saturday.
Funeral services for Robert will be held at 2 p.m. on Saturday, April 19, 2008, at the Plymouth Wesleyan Church, 11203 S. Michigan St., Plymouth. The Reverends John Branch and Ollie Dongell, pastors of the church, will officiate.
Interment will be in the Hepton Union Church Cemetery, Nappanee, Ind.
Memorial gifts in Rev. Klatt’s memory may be made to the Marshall County – Center for Hospice and Palliative Care, Inc.