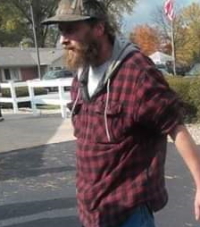 Rex Allen Brodbelt 48, of Plymouth, passed away Wednesday, December 11, 2019, after a brief illness. He was born on January 17, 1971, to Glenn Junior and Elise E. (Ault) in Plymouth.
Rex attended Plymouth High School until 1989 and then went to work for Akers until his health declined. Rex collected â€œDukes of Hazzardâ€ cars and train sets. He also loved to spend time fishing with his grandchildren. Rex is survived by daughter, Andrea Brodbelt of Plymouth; mother, Elise Brodbelt of Plymouth; siblings, David Brodbelt of South Whitley, IN, Connie (Kevin) Green of Argos, IN, and Glenn (Eliza) Brodbelt of Plymouth, IN; grandchildren Aaron Baney and Tyler Limberhand Jr.; survived by several nieces and nephews, aunts and uncles and cousins also survive.
Rex was preceded in death by his father Glenn Brodbelt, sister Sandra Lewis, nephews, Kevin, Conway, Dustin, and niece Jennifer.
Visitation for Rex will be held on Monday, December 16, 2019, at the New Oak Hill Cemetery, 1300 Chester St, Plymouth, IN 46563 from 1:00 P.M.to 2:00 P.M., funeral services following at 2:00 P.M. The Pastors David Johnston and Jesse Johnston will be officiating, burial to follow.