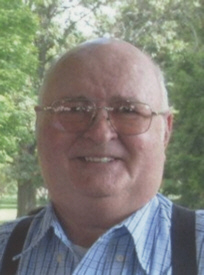 Rex L. “Clipp” Clippinger, 79, passed away unexpectedly at 3:51 p.m. on Sunday, March 23, 2014 at the St. Joseph Regional Hospital, Plymouth Campus.
Born in South Bend on October 12, 1934, Rex was the son of Lawrence W. Clippinger and Elsie M. (Whisman) Phillabaum. He graduated from Jimtown High School with the class of 1953. Rex served in Germany as a radio technician for the United States Army and was Honorably Discharged on August 7, 1957.
He attended college in Indianapolis, where he attained his barber license.
On March 5, 1961, Rex married Mary E. Helbling in Elkhart, Indiana.
Rex opened his own barber shop, Clipp’s Barber Shop, in LaPaz in 1965 and later in his life, opened another shop in Lakeville. He ran his shop until his retirement in 2002. Rex also worked for the Pickin’ Patch Blueberry Farm.
In his younger years, Rex traveled with the Joey Chitwood Stunt Show as an auto stuntman. He also enjoyed bowling in leagues. He loved auction sales and tinkering in his garage with antique cars. Rex coordinated euchre on Wednesdays and played on Saturdays as well at the Life Enrichment Center in Plymouth. He was a former member of the LaPaz Lion’s Club.
Rex is survived by his wife of 53 years, Mary, and their two children: Judy A. and Rex. L. Clippinger Jr., all of Plymouth, as well as, his half-brother, Robert W. Clippinger of Mountain Home, AK, and two nephews, Robert Clippinger of Fort Wayne, IN and Corey Clippinger of Paulding, OH.
He was preceded in death by his brothers, Fred and Junior, and a nephew, Dana Clippinger.
Visitation will be from 3:00 p.m. – 7:00 p.m. on Wednesday, March 26, 2014 in the Johnson-Danielson Funeral Home, 1100 N. Michigan Street, Plymouth.
Funeral services will be at 11:00 a.m. on Thursday, March 27, 2014 in the funeral home with Pastors Tom Clark and Bryce Bowman officiating.
Burial will be in the New Oakhill Cemetery with Military Honors provided by members of the American Legion Post 27, Veterans of Foreign Wars- Marshall County Post 1162 and D.A.V.
Notes of condolence may be sent to the family through the web-site: www.johnson-danielson.com