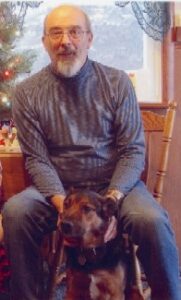 Richard A. Cooper, Sr, 62, affectionately known as Rick or Coop, a lifetime area resident, died at 3:39 p.m. on Sunday, November 20, 2011, in St. Joseph Regional Medical Center, Mishawaka.
The son of Nelson, Sr. & Ernestine Hauser Cooper, Rick was born on January 15, 1949, in South Bend.
A 1967 graduate of Plymouth High School, Rick was in the U.S. Navy from September 1967 to April, 1971, serving two tours of duty in Vietnam. He was a member of the American Legion and former member of the V.F.W.
On April 30, 1977, Rick and Adella Sue McEndarfer were married in Plymouth.
Rick retired after working over 30 years at Honeywell, formerly Bendix, in South Bend.
He enjoyed gardening, bowling, and spending time outside with his dogs, especially Lucky, with whom he had a special bond. He was also a Farmall and Ford enthusiast,
Rick loved his family dearly, and enjoyed spending time with his grandchildren.
He is survived by his wife, Adella, children: Michelle Lindvall, Chris & Gary Schneider, Sam Howard, Jr., Richard & April Cooper, Jr., all of Plymouth, Jeannie & Joseph Cooper-Jasinski, Jr. of Culver, Grandchildren: Sarah, Bruce, Sean, Samantha, Skylier, Jordan, Faith, Ricky III, Megan, Olivia, Benjamin, Shelbi, Sean and McKinzi.
Rick is also survived by his best friend and his traveling buddy, Lucky his dog who he rescued and nourished back to health.
Also surviving are three brothers: Nelson & Penny Cooper, Michael & Phyllis Cooper, David and Carol Cooper and an Aunt, Jane & Irvin Overmyer.
Visitation for Rick will be on Friday, November 25, 2011 from 4 to 8 p.m. in the Johnson-Danielson Funeral Home, 1100 N. Michigan Street, Plymouth.
Funeral services will be held at 11:00 a.m. on Saturday, November 26, 2011, in the funeral home.
Military Graveside services will be accorded to Rick, by the Plymouth American Legion, VFW, DAV and the South Bend Honor Guard in the Burr Oak Cemetery, Burr Oak, Indiana.
Memorial Gifts may be made to the Marshall County Humane Society P.O Box 22, Plymouth, Indiana 46563 or the American Cancer Society, Marshall County Chapter 9739 Sunnyside Drive Plymouth Indiana 46563.