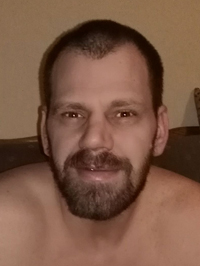 Richard A. Knowlton Jr., 42, passed away from injuries sustained in an automobile accident on Monday, October 8, 2018.
Rick was born in LaPorte, Indiana on November 29, 1975 to Richard A. and Cindy J. (Klinedinst) Knowlton. He worked for Gulf Stream Coach in Nappanee for over 20 years in production.
Rick was a kind-hearted soul and hard worker. He enjoyed fishing, camping, working on cars and playing dice and games. He was always tinkering with something, never liking to sit still. Rick was always willing to help anyone in need, with his heart of gold.
He is survived by his sons, Jonathon (Mira) Knowlton of Osceola, IN and Andrew Knowlton of Plymouth; grandchildren: Faith, Hope, Grace, Carter and Harmony; his father, Richard (Charlotte) Knowlton of Kingsford Heights, IN; fiancÃ©, Shelly Lempke of Walkerton and her son, Peyton; and siblings: Stephanie (Michael) Mucha of Plymouth, Tammy (Josh) Goins of LaPaz, Angela Tunis of Elkhart, Becky Knowlton of Plymouth and Robert (Donna) Knowlton of Howe, IN; as well as, numerous nieces and nephews.
Rick was preceded in death by his mother, Cindy.
Visitation will be held on Monday, October 15, 2018 from 5-8 p.m. in the Johnson-Danielson Funeral Home, 1100 N. Michigan Street, Plymouth.
Funeral services will be held on Tuesday, October 16, 2018 at 11 a.m. in the funeral home. Visitation will resume one hour prior.