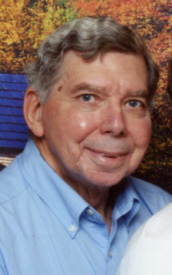 Richard “Dick” A. Krull, 76, lifetime resident of Plymouth, passed away Monday, March 14, 2016 in the Signature Health Care – Bremen. Dick was born October 8, 1939 in Plymouth, to the late Walter J. and Edna E. (Henley) Krull. On September 11, 1982 in Plymouth, he married Shirley M. Williams; she survives. He retired after fifteen years of service from the Fulton Industries where he worked on the assembly line. After retirement Dick worked for Wal-Mart as a greeter for seven years. He also owned and operated “Dick’s Small Engine” in Argos. He was a hard worker who enjoyed NASCAR, especially Rusty Wallace and he loved tinkering with engines. Dick was a former member of the Optimist Club and the Moose Lodge. Surviving is his wife; Shirley M. Krull of Plymouth, daughter; Barbara and husband Kevin Williams of Arizona, two step-daughters; Kathy and husband Lori Keck of Kentucky, Karen and husband Lance Brewer of Bloomington, six grandchildren, ten step grandchildren, and six step-grandchildren. Also surviving are his siblings- Edward Krull of Culver, Margaret and husband Dennis Emmons Sr. of Plymouth, niece; Lori Scales of Evansville, great-niece; Jennifer and husband Carl Reedy of Nashville, TN, great-nephew; Edwin Scott of Nashville, TN, and a great-great-niece; Olivia Reddy of Nashville, TN.
He was preceded in death by his parents, son; David Krull and a step-son; Michael Stoneburner. Friends may visit with the family on Monday, March 21, 2016 from 11:00 AM until 12:00 PM at the Johnson-Danielson Funeral Home, 1100 North Michigan Street, where services will begin at 12:00 PM, with his son-in-law; Rev. Lori Keck officiating. Burial will be in the Morris Park Cemetery.
Memorial contributions may be directed to either the Marshall Starke Development Center, 1901 Pidco Drive, Plymouth, Indiana 46563 or to the Riverside Christian Training School, 114 Riverside School Rd, Lost Creek, KY 41348.