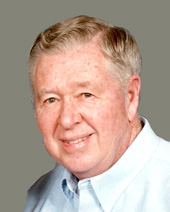 Richard A. â€œRichâ€ Wilson, 77, of Plymouth, passed away after a short term illness with his family by his bedside at 5:38 p.m. on Monday, July 10, 2017.
Rich was born in his folkâ€™s simple family home on March 5, 1940 the son of Albin W. and Edythe L. (Smith) Wilson. He graduated from West High School with the Class of 1958, where he held the basketball record for free-throws. He was instrumental in erecting and maintaining the monument dedicated to the memories made there by many students who attended West High School.
Just celebrating their 40th Anniversary this past March, Rich took the former Melinda L. White as his wife on March 29, 1977 in the Plymouth Presbyterian Church.
In his early years he farmed many acres in West Township and also began working in the construction department for NIPSCO in 1966. He worked his way to becoming a gas serviceman and after 31 years, he retired in 1997.
Rich enjoyed gardening, yard work, cutting wood and woodworking. He crafted the cross that hangs in the New Oak Hill Cemetery Chapel. He was great at supervising others. In his pastime, he had a routine of going to Martinâ€™s Supermarket for coffee and early morning breakfast at Cindyâ€™s or Castawayâ€™s. He loved visits from family and friends.
He was a longtime member of the Moose Lodge in Plymouth and proud union member of the United Steel Workers.
Rich is survived by his wife, Melinda of Plymouth and their children and families: daughter Kim S. (Kevin) Milliser of Plymouth and children Josh (Beth) Engle and Kelsey Milliser, son Rick A. (Tracy) Wilson of Culver and their children Jessica (Derik) Fishburn, Ryan Wilson and Erica, and Autumn and Makayla Wilson, and daughter Angela L. Wilson of Plymouth. Also surviving are three great-grandchildren: Aedreanna, Gage and Kade.
He was preceded in death by his parents and sister, Darleen Xaver.
Visitation will be held from 4-7 p.m. on Friday, July 14, 2017 in the Johnson-Danielson Funeral Home, 1100 N. Michigan Street, Plymouth.
Funeral services will be held at 11 a.m. on Saturday, July 15, 2017 in the funeral home with Rev. Paul Nye officiating.
Burial will be in the New Oak Hill Cemetery.
Memorial contributions can be made to Center for Hospice Care 112 S. Center St. Plymouth, Indiana 46563 or Southern Care Hospice 1626 E. Day Road, Mishawaka, IN 46545.