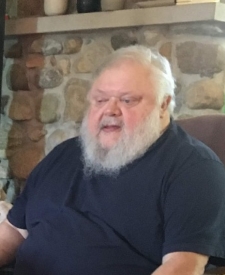 Richard Arthur Newberg, 69, passed away in his home surrounded by his loving family on May 7, 2019. Born to Milton and Dorothy (Piper) in Plymouth, Dick was the youngest of six children. Dick graduated from Plymouth High School in 1967, and through mutual friends he met his soon to be bride Cheryl O’Keefe. Cheryl and Dick married on June 6th, 1970 at St. Thomas Church in Plymouth and that became their church home. Dick spent his career as a Journeyman Tool and Dye maker and had worked at Lobdell Emery Manufacturing Company, Argos, IN for over 23 years.
Although Dick was a man of few words and very stoic, he loved and enjoyed his family. He took immense pride in his son Ian’s choice to enlist in the National Guard. Dick enjoyed time with his granddaughters, as well as going out to the movies. He had a particular fondness of motorcycles and concerts, seeing Rolling Stones live twice with Cheryl. The couple would attend many Blues festivals throughout their 48 years of marriage. Those left to treasure his memories are his wife Cheryl of Walkerton; his son Ian and Ianâ€™s daughters, Natasha Faye and Natalie Alexis of Koontz Lake, IN; Sisters Alice Ruff of Plymouth, IN and Edna Miller of East Lansing, MI; and many other family members and friends will also treasure his memory. Dick was preceded in death by his parents and his brothers Victor Carlton Newberg, Jon Oscar Newberg and Robert Milton Newberg.
Memorial contributions in Dickâ€™s name can be made to St. Thomas Church 400 N Center St, Plymouth, IN 46563 in lieu of flowers. A memorial service is scheduled for May 17th at 11 a.m. with a visitation from 10 a.m. until 11 a.m. all at the St. Thomas Church 400 N Center St, Plymouth, IN 46563.