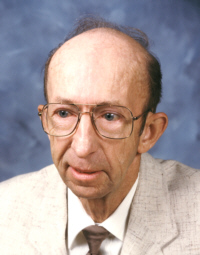 Richard C. Hyatt, 82, of 7429 Union Road, Plymouth, died of natural causes on Saturday, October 8, 2005, at 8:15 a.m. in Saint Joseph Regional Medical Center, Plymouth. Born in South Bend on July 21, 1923, Richard was the son of Everette L. and Inez Slocum Hyatt. He had lived in Plymouth for the past 50 years. Prior to that, he spent 23 years in South Bend.
He attended Riley High School in South Bend, Indiana
In World War II, Richard served three years in the United States Army. He was honorably discharged as a Corporal.
He was employed for 30 years as a truck driver and warehouse foreman for Woodworth Storage in South Bend.
On May 11, 1946, in Roseland, Ind., Richard and Pauline M. Bennett were married. Pauline died on October 29, 1995.
Richard liked to read and enjoyed working with wood. He was a great father and loved and took great pleasure in his children and grandchildren.
Richard is survived by four daughters and two sons. His daughters are: Laura and James Vervynckt; Betty and Bruce Ferguson and Nancy Masten Sensibaugh, all of Plymouth Ind., and Arleen and Conrad Calmer, Seymour, Ind. His two sons are Dennis and Bonita Hyatt of Santa Fe, Texas and Earl and Patricia Hyatt, South Bend, Ind.
Richard is also survived by 17 grandchildren and 7 great grandchildren and 2 step grandchildren.
Two sisters, Virginia Evans of Granger, Ind., and Dorothy Ford of Berrien Springs, Mich., also survive.
Richard was preceded in death by his parents, his wife, Pauline and two brothers, Homer and Robert Hyatt.
Friends will be welcomed to celebrate Richard’s life on Monday, October 10, 2005, from 4 to 8 p.m. in the Johnson-Danielson Funeral Home, 1100 N. Michigan St., Plymouth.
Funeral services will be held on Tuesday, October 11, 2005 at 2:00pm in the funeral home with Greg Bouck, assistant pastor of the Plymouth Wesleyan Church officiating.
Burial will be in New Oakhill Cemetery, Plymouth, Ind.
Memorial gifts may be made in Richard’s memory to the National Emphysema Foundation.