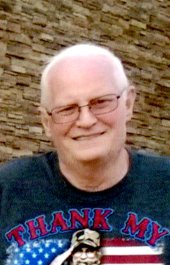 Richard “Dickie” Cartwright Jr., 62, passed away after a courageous battle with cancer and his family by his side at his residence on Friday, August 7, 2015. Dickie was born in Plymouth, Indiana on September 17, 1952 to Richard and Virginia (Amen) Cartwright Sr. Dickie served our country in the U.S. Marines from 1970-1972. He was a volunteer firefighter and EMT for 27 years with the LaPaz Fire Department and the Lakeville LaPaz Ambulance Service. He loved fishing, watching his grandchildren grow and blossom in life and sporting events, and dealing blackjack at local fire department casino nights. He also was a member of the American Legion Post 385, LaPaz, and the County Line Brethren Church. On October 6, 1973 in Plymouth, Indiana, Dickie took to be his bride, Carol L. Guard. Dickie retired in 2013 after 29 years of service from International Wire in Bremen, where he was a supervisor.
Dickie is survived by his wife, Carol L. Cartwright of Plymouth, son, Richard “Rick” (Erica) Cartwright III of LaPaz, daughter, Christina “Chrissy”(Terry) Fort of Plymouth, 6 grandchildren, Aubrey Shafer, Lucy Shafer, Benjaymyn Fort, Adam Fort, Willow Cartwright, and Shelby Fort, sister, Bonita (Jerry) Berndt of Knox, brothers, Bob Grover of Middlebury, Clyde (Debra) Cartwright of Plymouth, Charles (Linda) Cartwright of Plymouth. Also surviving are many nieces and nephews.
He was preceded in death by his parents, brother, Francis “Bud” Cartwright, twin sister, another brother, 2 brothers-in-law, Robin and Rocky Guard. Visitation will be from 3-7 p.m. on Tuesday August 11, 2015 in the Johnson-Danielson Funeral Home, 1100 N. Michigan Street, Plymouth.
Funeral services will be held at 11 a.m. on Wednesday, August 12, 2015 in the County Line Brethren Church, 69988 US 31 HWY, Lakeville, IN, with Pastor Wyatt Smith officiating. Visitation will resume one hour prior to the service in the church.
Burial will be in the Sandridge Cemetery, Bourbon, with Military Honors provided by members of the American Legion Post 424, Bourbon. Memorial contributions can be made to the County Line Brethren Church, or the LaPaz Fire Department, 411 S Michigan St, PO Box 369, LaPaz, IN 46537.