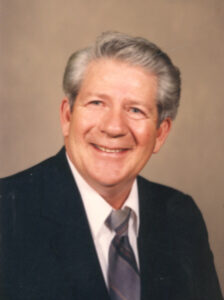 Richard J. “Dick” Lewis, 74, of 406 Charles St., Plymouth, died at 10:30 a.m. on Friday, August 10, 2007 in his home of natural causes. Dick had been a resident of Plymouth for 37 years, coming from South Bend.
Dick was born on July 23, 1933 in Rochester, Indiana. He was the son of Joel H. and Margaret A. (Henderson) Lewis.
He was a graduate of Central High School, South Bend.
On November 15, 1952, Dick and Theresa A. Susanna were married in South Bend.
Dick started Lewis Construction in 1970 when he moved to Plymouth. He built several houses in the area. He then worked for Eisenhour Home Improvements, retiring in June of 2006.
Several homes in Marshall County display his unique woodworking and ceramic tile talents. Dick also took pride in the Native Indian wood flutes that he made. An avid reader, he also followed Notre Dame Football.
Despite his 15 month battle with cancer, he never lost his sense of humor and enjoyed visiting with people he had met through business contacts or medical visits. Dick had been a Boy Scout Leader in South Bend where he received their “Order of the Arrow”.
He is survived by Theresa, his wife of almost 55 years, one son, Richard N. “Rick” and Donna Lewis of West Palm Beach, Florida; and two daughters: Susanna A. and Art Llovet of Argos and Elizabeth A. and Brian Mosbey of Granger.
Dick is also survived by six grandchildren: Christopher (Brenda) Lewis and Heather (Michael) Anderson of Plymouth; Stephanie (Doug) Heckaman and Adam Llovet of Argos; Eric and Ryan Babendrager of Granger and three sisters.
Great Grandchildren include: Ashton and Mia Lewis of Plymouth; Peyton and Micah Heckaman of Argos and Karilynn and Sean Anderson of Plymouth. He was preceded in death by his parents, two sisters and a brother.
Friends will be welcomed by Dick’s family to celebrate his life and share their memories on Monday, August 13, 2007, from 4 to 8 p.m. and after 7 a.m. Tuesday at the Johnson-Danielson Funeral Home, 1100 N. Michigan Street, Plymouth. There will be a Prayer Service at 7:30 p.m. Monday at the funeral home.
A Mass of Christian Burial will be held at 1:00 p.m. on Tuesday, August 14, 2007, in St. Michael Catholic Church, Plymouth, where Dick was a member.
Burial will be in St. Michael’s Cemetery, Plymouth.
Memorial Contributions in Dick’s memory made be made to the American Lung Association, the American Cancer Society or St. Michael’s Parish.