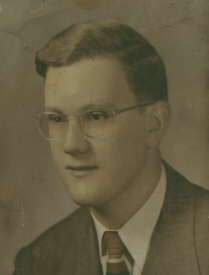 Richard H. “Dick” Wilson, 73, a Plymouth resident for the past 31 years, died, following a lengthy illness, at 9 p.m. on Sunday, July 3, 2005. Dick died at his home on Woodbury Drive, under the loving care of his family, the Marshall County Hospice, and his beloved cat, “Lily.”
Dick was born in Marion, Ind., on April 19, 1932. He was the son of Rollie O. Wilson and Lorene M. Deal Wilson. He was a 1950 graduate of Marion High School and a 1957 graduate of Franklin College.
During the Korean Conflict, Dick served in the United States Army. He was stationed in France and Germany.
On September 6, 1958, in Batesville, Ind., Dick and Harriet C. Davis were married.
He had worked as a Plastic Sales Engineer for several companies.
He enjoyed the game of golf, mowing his yard and caring for his pets. He was a euchre player and was a faithful attendee at his children’s activities.
Dick was a member of Sigma Alpha Epsilon fraternity and the American Legion. He was a very active and devoted volunteer with the American Red Cross, Marshall County Chapter. He could always be counted on to support the various activities of the organization of which his wife, Harriet, is the Executive Director.
Dick is survived by Harriet, his wife of almost 49 years and by their three children: two daughters and a son.
They are: Susan and Pete Keener, Grand Rapids, Mich.; Shannon and Todd Samuelson, Plymouth, Ind.; and Thomas and Shari Wilson, Franklin, Ind.
Nine grandchildren also survive.
Dick was preceded in death by his parents and two brothers, Robert and Donald Wilson.
Friends will be welcomed by the family to share memories of Dick on Wednesday, July 6, 2005, from 4 to 8 p.m. in the Johnson-Danielson Funeral Home, 1100 N. Michigan St., Plymouth.
Funeral services, officiated by the Rev. Dennis Wenzel, pastor of the Immanuel Lutheran Church, Donaldson, Ind., will be held at 10 a.m. in Johnson-Danielson Funeral Home, on Thursday, July 7, 2005.
Burial will be in the Estates of Serenity Cemetery, on Lincoln Blvd., Marion, Ind.
Memorial gifts to honor Dick may be made to the American Red Cross, Marshall County Chapter.