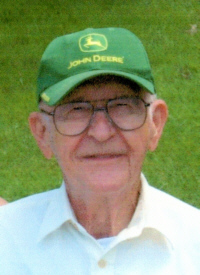 Richard E. “Jacko” Jablonski Sr., 86, passed away with his family by his side at 8:58 a.m. on Saturday Morning, April 4, 2015 in the St. Joseph Regional Medical Center, Plymouth.
Richard was born in Albion, Michigan on September 22, 1928 to Maryan and Angelia (Szlosea) Jablonski. In the fall of 1953, Richard married his first wife, Geraldline R. Lozynski in Chicago, Illinois.
Richard enlisted into the US Army during WWII as a medic, He then transferred to the US Air Force and served during the Korean Conflict as a supply transporter. He was pulled out of Korea and send on a ship to Japan, where he enjoyed cooking on the ship.
On May 14, 1975 in Chicago, Richard would marry Genevieve Jaskowiak. The couple met while at a club dancing the polka. She would precede him in death on March 5, 1999.
He worked in the printing press industry starting in 1957 and helped set up the press system at the former Glenmark in Plymouth. He would “retire” at the age of 62, but then decided to go and work for AK Industries in Plymouth. The hard worker he was, Richard was just at work this past Monday.
Richard enjoyed listening to polka and dancing to polka. He could be found mowing his yard, building model airplanes and watching the news. He loved time with his family.
He is survived by his children: Richard E. (Lori) Jablonski Jr. of Willow Springs, Missouri, Ronald Jablonski of Germany, Robert A. (Melissa) Jablonski of Grovertown, Indiana, and Angela (Eddie) Mooney of Clintwood, Virginia; seven grandchildren: Pam, Westley, Matthew, Bobby, Nathaniel, Gregg and Cordel; his two brothers, Emil (Edith) Dzurkevitz and Edmund Jablonski; and his step-children: Patty Mauro, Nancy Mauro and Judy Amico.
He was preceded in death by his infant daughter, Therese, and sisters, Sophie Lesco and Helen Parton.
Visitation will be from 4-6 p.m. on Thursday April 9, 2015 in the Johnson-Danielson Funeral Home, 1100 N. Michigan Street, Plymouth. Funeral services will follow in the funeral home on Thursday at 6 p.m. with Chaplain Mary Ann LaPlante officiating. Military Honors provided by members of the American Legion Post 27, Veterans of Foreign Wars- Marshall County Post 1162 and D.A.V will immediately follow.