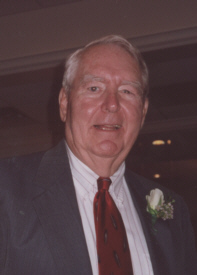 Richard F. Joyce, 84, former resident of Plymouth, passed away Saturday, August 29, 2015 in Peabody Retirement Community, North Manchester. Richard was born June 25, 1931 in Indianapolis, Indiana, to the late Robert P. and Ruth Mae (Jupin) Joyce. He attended Shortridge High School in Indianapolis, where he met his wife and they graduated in 1949. After graduation Richard went to Indiana University and married Mary Joan Jackson on September 2, 1951. He passed away four days before their 64th wedding anniversary. Upon their graduation from IU in 1953, he was commissioned as an officer in the Air Force; he served from 1953 to 1955 as Intelligence and Security Officer in Charleston, South Carolina, where son, J. Patrick, was born.
After returning to Indianapolis, daughter, Mary Margaret “Peggy” Magnesen was born, and Dick started attending IU Law School at nights. While in law school he served as Clerk to Appellate Court Judge Remy Bierly and Senate Court Judge Amos Jackson. He was admitted to the Bar in 1961 and moved to Plymouth, IN at the invitation of Marshall Kizer. Richard became a partner in the Kizer & Neu law firm where he worked closely with Marshall in trial work and also was well known for his real estate legal expertise. He served in many capacities throughout his career. Previous appointments and memberships include the following: City Attorney under the administrations of Ernie Bixel and Chuck Glaub, Deputy Prosecutor, Town and School Attorney for several local communities, Board of Directors for Indiana State Bar Association, Member of Northern Indiana Criminal Justice Agency, Past president Marshall County Bar Association, Past president of Rotary, Member American Bar Association, Indiana State Bar Association, Indiana Trial Lawyers Association, Masonic Mystic Tie Lodge #398 of Indianapolis, and fifty year member of First United Presbyterian Church.
In 1988 Richard had a severe stroke, but continued to work, play golf, and enjoy life. He and his wife retired in 1996 and spent their winter months for the next 18 years in Englewood, Florida.
Surviving is his wife, Joan Joyce, son, Patrick Joyce, daughter, Mary Margaret “Peggy” (Larry) Magnesen, one granddaughter, Mary Caroline Magnesen, two grandsons, Eric (Kristen) Magnesen, Robert (Jennifer) Magnesen, and brother, William T. Joyce. Memorial services will be held Saturday at 2:00 p.m. September 26, 2015 in the Johnson-Danielson Funeral Home, 1100 N. Michigan Street, Plymouth with Rev. Sue Babovec officiating. Friends may call from 12:00 p.m. until time of service on Saturday at the funeral home.
Burial will be in the New Oakhill Cemetery.
Memorial contributions may be directed to ARC of Wabash County, 595 South Miami Street, Wabash, Indiana 46992.