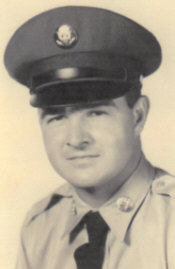 Richard “Dick” Glen Listenberger, living for the past 20 years in the home he was born in, 914 Thayer St., Plymouth, died in Saint Joseph Regional Medical Center, Plymouth, at 10:23 p.m. on Wednesday, January 14, 2004. Dick died after a courageous 2 1/2 year battle with lung cancer. He was one day shy of being 69 years old, dying the day before his birthday.
Born January 15, 1935, Dick was the son of Walter W. and Alta C. Hess Listenberger. He graduated from Plymouth High School with the class of 1953.
Dick served his country as a cook in the United States Army.
On March 27, 1964, in Plymouth, Dick and Anna E. Cochran were married.
As a youngster he sold vegetables throughout the neighborhood and then worked in the South Side Grocery. Just prior to his military service he went to work for United Telephone, now the Sprint Telephone Company.
Upon completion of his tour of duty, he returned to Sprint to complete a 42 year career, retiring in 1993.
Dick was a member of the men’s bowling league. He enjoyed fishing of all kinds and sported a prize fish from the waters of Arkansas. He enjoyed the challenges of working with a computer and doing crossword puzzles. His children and grandchildren were important to Dick and he enjoyed them and their many sporting events and activities.
He attended the Cornerstone Community Fellowship, LaPaz, and was a member of Moose Lodge #741.
Dick is survived by his wife, Anna, and by their children: nine daughters and two sons and their spouses.
His daughters are: Sue and Keith Wickens, Plymouth, Ind.; Lynn and Neil Bemenderfer, Indianapolis, Ind.; Kathleen A. and Charles Detrick, Plymouth, Ind.; Peggy L. and Thomas Patrick, Bourbon, Ind.; Tammy S. and Jerry Smith, Lincolnton, N.C.; Anna E. and Leonard Chambers, Argos, Ind.; Glenda J. and Joseph Bright, Argos, Ind.; Ellen C. and Shawn Master, Plymouth, Ind.; Kirsten L. and Barry Master, Culver, Ind. Two sons also survive: Richard M. and Kimberly Balke, Ft. Wayne, Ind., and Alfred G. Listenberger and his fiancée Sonya, Niles, Mich.
Twenty-nine grandchildren and six great-grandchildren also survive, together with several nieces and nephews.
Dick was preceded in death by his parents, two brothers; Robert Listenberger and an infant brother, Walter, Jr. Two sisters, Irene Anderson and Donna Belle Gollnow have also died. Friends may call at the Johnson-Danielson Funeral Home, 1100 N. Michigan St., Plymouth, from 2 to 6 p.m. on Sunday, January 18, 2004.
Funeral services officiated by Rev. Stephen Cox, pastor of the Cornerstone Community Fellowship, LaPaz will be held in the funeral home on Monday, January 19, 2004, at 10:30 a.m. Interment will be in New Oakhill Cemetery, Plymouth, where military graveside honors will be accorded him by the V.F.W. Post 1162.
Memorial gifts in Dick’s memory may be made to the Marshall County Hospice or the St. Joe Cancer Treatment Center.