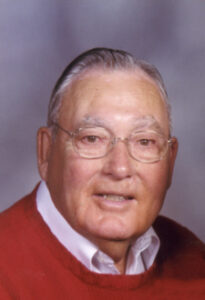 Lifetime Plymouth resident, Richard Hal Klein better known as Dick or “Blackie” passed away Saturday evening August 30th, 2008 in the St. Joseph Regional Medical Center – Plymouth Campus.
Dick was born to Victor P. and Catherine Pearl (Freyman) Klein on December 10th, 1921. Dick graduated from Plymouth’s Lincoln High School in 1939, where he was active in football and cheerleading. He was offered a football scholarship to Franklin College.
After graduating from high school he met and married Mary Marie Jarrell. They were married July 12th, 1942 in the Plymouth First United Church of Christ.
Dick began his business career at a very young age of 10 years old. He sold fresh vegetables from his little red wagon which included a scale to weigh them. He owned and operated the Hippety Hop restaurant in 1947 and returned to the restaurant business in the 1980’s with the Sunrise Coffee Shop. In addition he ran the Shell Oil distributorship with his father and brother which later became the Klein Oil Company. His entrepreneurial skills were also demonstrated in sales and as a visionary in the community. He helped to develop the current Plymouth Airport and other land development north of Plymouth.
Dick was a member of the First United Church of Christ since he was baptized as an infant. He went on to serve the church as a Sunday School Superintendent, Deacon and Elder. He served the community as a former member of the Plymouth City Council and the Board of Adult Mental Health Services. Dick was along with his father a charter member of the Plymouth Rotary Club.
A beloved grandfather, he enjoyed following their many interests which included; theater, athletic events, horse shows and academic programs.
His family includes his wife Mary, two daughters and their families; Susan and husband Tom Brinton with their children: Jessica Susan Klein Brinton of Washington, D.C. and Amanda Dianne Klein Brinton a student at the University of Florida, Gainesville. Daughter Sarah Lynn and husband Dan Flynn with their children: Cadet Sean Patrick Klein Flynn at the United States Military Academy, West Point, NY, Connor Richard Klein Flynn, Matthew Thomas Klein Flynn and Mary Catherine Klein Flynn all of Plymouth.
Two sisters also survive. They are; Helen Glaub and Betty (Louis) Wenino both of Plymouth and includes numerous nieces and nephews.
Dick was preceded in death by an infant sister, Henrietta Klein and a brother Phil Klein.
The family will receive friends on Saturday September 6th, 2008 from 9 – 11 a.m. in the First United Church of Christ, 321 N. Center Street, Plymouth where services will be held at 11 a.m. The Reverends Steven Voelker and Ronald Liechty will officiate. A reception will immediately follow services in the church fellowship hall.
In lieu of flowers the family requests memorial gifts be made to the church.