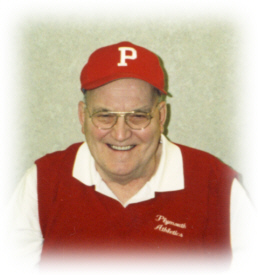 Richard J. “Rick” Skiles, 68, 222 Parkview Drive, Plymouth passed away at 4:13 p.m. Monday, June 21, 2010, in the Pilgrim Manor Care Center, Plymouth.
A former resident of Walkerton, Rick has resided in Plymouth since 1976.
He was born on April 28, 1942 in Ft. Wayne, Indiana, the son of Russell S. and Lela G. (Clay) Skiles. Raised in Tyner, he played basketball and baseball in his youth and graduated with the Tyner High Class of 1961.
Rick’s appreciation for sports continued as a father, serving as a director and coach for many years in the Walkerton and Plymouth Little League programs. In 1990, he accepted a position on the custodial staff of Plymouth High School and for the next 14 years, with great pride, he was the man behind the scenes preparing the gyms for game night play and later returning them to order. Rick never missed the chance at every home game to hold the door and high five every player as they entered the court. After his retirement and in declining health, Rick would make Pilgrim Manor his home. There, he thoroughly enjoyed joking with and teasing the staff as he would his own family. Their care for him made it possible to continue attending home games in his Plymouth attire, positioned to see his team enter the gym. His supportive spirit will always remain within The Rock.
For many years, Rick was an active member of the Marshall County Blueberry Festival Board.
He loved his family members who include a son, Scott and wife Kim Skiles, a daughter, Brenda Skiles all of Bloomington, three grandchildren: Scott, Sean and Shelby and one sister, Sharon Cole of Plymouth.
He was preceded in death by his parents.
The family will receive friends from 2 – 4 p.m. on Saturday, June 26th, in the Johnson-Danielson Funeral Home 1100 N. Michigan Street, Plymouth. A tribute service will be held at 2 p.m. Sunday, June 27th, in the Plymouth Wesleyan Church 11203 S. Michigan St., led by Pastor Oliver Dongell. Burial will follow in New Oakhill Cemetery, Plymouth.
In lieu of flowers the family suggests an expression of sympathy in the form of a memorial gift to the Plymouth High School Athletic Department, 1 Big Red Drive, Plymouth, Indiana 46563, which Rick himself so faithfully supported.