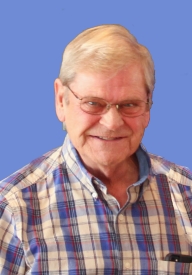 Richard W. â€œDickâ€ Johnson, 76, passed away in his home surrounded by his loving family on May 4, 2019. Born January 28, 1943 to Eric and Norma (Peterson) Johnson Jr. in Plymouth, Dick was a lifelong resident. Dick graduated with the PHS class of 1961 and from Indiana College of Mortuary Science in 1963. Dick was always active in the Plymouth community. He served as City Councilman, was a local business owner and served on the board of directors for the Blueberry Festival for over 20 years. He was the original owner of The Frame Shoppe where he made many friendships and connections that lasted through the years.
Dick enjoyed trips to upper Michigan where he would camp, fish and spend time with his friends and family relaxing. He enjoyed going to concerts seeing everything from Manheim Steamroller to famous country artists. He had a love of Ford Mustangs. Dick was blessed with an ornery sense of humor and he was not afraid to use it.
Those left to treasure his memory are his son Robert and Debra Johnson of Plymouth; his daughter Diane and Scott Ross of Plymouth; his former spouse Teresa Monehen of Plymouth; Teresa’s sons Jason Yoder, Chad Yoder and Ryan Yoder, all of Plymouth; his sister Lois and John Countryman of North Judson, IN; 5 grandsons and 3 great-grandsons; his canine companions Bailey and Sonny; and many other relatives and friends will dearly miss his fun spirit.
Memorial contributions in Dickâ€™s name can be made to Center for Hospice Care 112 S. Center St. Plymouth IN 46563 in lieu of flowers. A memorial service is scheduled for May 9th at 6 p.m. with a visitation from 4 p.m. until 6 p.m. all at the Johnson-Danielson Funeral Home 1100 N. Michigan Street Plymouth, IN 46563