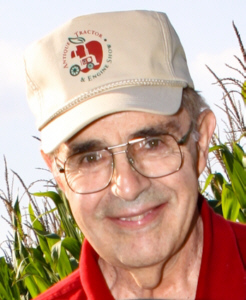 Richard Lawrence Cummins, 69, of Nappanee, IN passed away at 12:20 p.m. on Thursday, May 13, 2010 at home in the presence of his loving family after an extended illness.
A life-long resident of Plymouth until his retirement from farming, Richard is survived by his wife of 47 years, Donna J. (Mellott) Cummins, daughter, Kimberly and Larry Conrad of Goshen, son, Brent and Tamara Cummins of Granger, and daughter, Darla and Chris Lingle of Wakarusa. Grandchildren include: Lindsay Allen, Jacob Allen, William Espich, Chelsea Allen, Emma Cummins, Hannah Cummins, Danielle Lingle, Luke Lingle, Claire Lingle, and one great granddaughter, Kierstyn Allen. Also surviving is his brother, Allen and Marjorie Cummins of Lafayette, IN, brothers-in-law, John (Donna) Mellott and Larry (Nancy) Mellott of Etna Green, IN.
With great appreciation, the family thanks Lynn and Jeannie Crothers for their enduring friendship.
Richard was preceded in death by his parents, George A. Cummins and Ruth (Lawrence) Cummins-Hohman of Plymouth.
Richard was a life-long farmer. In retirement, he enjoyed fishing and spending time with his grandchildren. He also enjoyed restoring antique tractors and gas pumps.
A 1958 graduate of LaPaz High School, he attended Purdue University, was an active member of Shiloh Wesleyan Church, Plymouth, until moving to Nappanee, where he attended the First Church of God.
The family will receive friends from 2 – 4 & 6 – 8 p.m. on Tuesday, May 18, 2010 in the Johnson-Danielson Funeral Home, 1100 N. Michigan Street, Plymouth where services will be conducted by Rev. Sam Bennett, pastor of the First Church of God, at 11 a.m. on Wednesday. Burial will follow in the New Oakhill Cemetery, Plymouth.
In lieu of flowers, the family requests memorials be made to Goshen General Hospital – Care at Home and Hospice Services, P.O. Box 139, Goshen, IN 46527 or First Church of God, 72036 County Road 7, Nappanee, IN 46550.