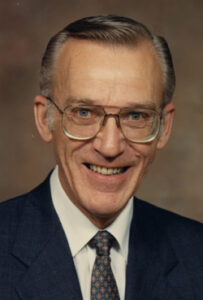 Richard L. â€œDickâ€ Davidson, 85, passed away at 10:54 a.m. Saturday, May 5th at the Peabody Retirement Community in North Manchester, Indiana, home to him and his wife Phyllis for the past five years. They were former owners of the Johnson Funeral Home in Plymouth.
Dick was born in Omaha, Nebraska on July 25, 1932, the son of Francis and Pauline (Perry) Bergman Davidson. The family moved to Fulton County, Indiana and Dick graduated from Rochester High School in 1950. He worked for Foster Funeral Home in Rochester and in 1952 he graduated from the Indiana College of Mortuary Science. Later that year he enlisted in the United States Army and served in Japan during the Korean Conflict.
After his time in the service he returned to the area and began dating his high school classmate Phyllis A. Neff and on November 12, 1954 in Rochester, Indiana they were married and have remained at each otherâ€™s side for the past 64 years.
Dickâ€™s career as a licensed funeral director included membership in the National Funeral Directors Association and Indiana Funeral Directors Association having served as Secretary and Treasurer. In 1960, Dick joined Ralph Ditmire in Fulton, and formed the Ditmire-Davidson Funeral Home. He later became a manager with Flanner & Buchanan Mortuaries in Indianapolis from 1965-1978 at which time he and Phyllis assumed ownership in Plymouth from Francis and Martha Johnson and under their leadership made many notable improvements in the funeral home until their retirement in January 1995.
As Plymouth residents, he and Phyllis were active members of the Plymouth 1st Presbyterian Church. He also held membership in the Plymouth Chapter of Rotary International, the Plymouth Kilwinning Lodge, Scottish Rite â€“ Valley of South Bend and Murat Temple in Indianapolis. Dick did many things in the community as a quiet leader but was proud to have been a United Way Campaign Chair.
Dick is survived by his wife Phyllis, a daughter Judith Ann Wintin and husband Doug of Ft. Wayne, Indiana, two granddaughters; Audrey Baker, husband Zack and their daughters Juliet & Ella; Erica Lomont, husband Pete and their children Chase, Drake, Nora & Lola.
He was preceded in death by a son Jeffrey Allen Davidson on March 27, 1985.
Visitation for family and friends will be held on Thursday, May 10th from 5 â€“ 7 p.m. in the Johnson-Danielson Funeral Home 1100 N. Michigan St., Plymouth. A Masonic Memorial Rite will immediately follow at 7 p.m. in the funeral home.
Funeral services will be held on Friday, May 11th at 11 a.m. in the funeral home with Life Celebrant James Smart officiating. A luncheon will immediately follow services in the fellowship hall of 1st Presbyterian Church, 401 N. Walnut St., Plymouth.
A graveside committal service will be held at 2 p.m. Friday in the Rochester I.O.O.F. Cemetery, 620 W. 3rd Street.
Memorial gifts may be made to the 1st Presbyterian Church or Marshall County Humane Society, P.O. Box 22, Plymouth, IN 46563.