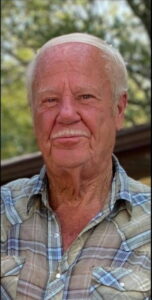 Richard and Patricia worked hard to raise a family and home to be proud of. Patricia raised the children, Rick, Bill, Lisa, and Tammy, while Richard worked. Their home was always full of friends and family members.

They spent countless evenings playing cards with friends. The two ventured often to Pat’s Bar in Lapaz. Drives to Florida were a highlight, especially the drive through Tennessee and Georgia.

Richard enjoyed working in his yard, complete with a variety of trees, well-kept grass, and large animal-shaped lawn ornaments. He also enjoyed critiquing your yard from afar.

Richard was the plant manager at Bremen Glass for 34 years. He never missed a day of work. He was a man’s man, fitted with his patented Levi’s and western button-up shirt. Unless it was summertime, then he would be shirtless. As a father, friend, or boss, you knew where he stood, which was often firmly stubborn. He could reprimand you one moment and in the next, have your back. He treated everyone fairly. Even if you forced him to fire you, you still respected and liked Richard Dixon.

He retired to take care of the love of his life as she battled and ultimately lost, her bout with cancer. A devoted husband, a day rarely passed in which he did not visit her at the cemetery, even after 18 years of separation. He mowed her plot of land at the cemetery because she deserved the best.

After Patricia’s passing, he became a babysitter. He was a ‘Grandpa’ to many; not just his actual grandchildren. They held a special place in his heart. He gifted nearly each of them with a unique nickname. Some of the classics include ‘Trash’, ‘Pee-Wee’, and ‘Punker’. He had great fun chasing them with a yardstick or making them squeal by ‘milking the mouse’. In his later years, he was especially admired by his great-grandsons, Karsen, Kysen, Bryson, and Kamden.

He is survived by his sons, Rick L. Dixon and Bill Dixon, Plymouth; daughters, Lisa D. (Jeff) Farver of Plymouth and Tammy A. (Rusty) Harter, Plymouth; sister, Joyce, Florida; 10 grandchildren, 17 great-grandchildren, as well as many important nieces, nephews, and cousins.

Richard is preceded in death by his parents, Cecil and Agnes; wife, Patricia; brothers, Jim, Jack, and Joe; sisters, Dorann and Sandy; and granddaughter Amber Starr.

Visitation will be held 4-7PM on Thursday, June 10, 2021 at the Johnson-Danielson Funeral Home, 1100 N. Michigan Street, Plymouth. Funeral services will be held at 11am on Friday, June 11, 2021 with Rev. Charles Krieg officiating.

To view the recording of the funeral service from June 11th, please click the link below. The recording will be available to view through 6/17/2021.