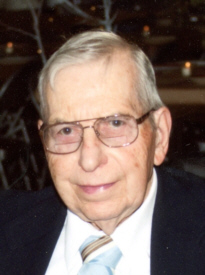 Richard M. Becherl, 91, passed away at 8:55 a.m. on Tuesday, November 1, 2016 in the St. Joseph Regional Medical Center, Mishawaka.
Richard was born on May 26, 1925 in Cooperstown, North Dakota to Charles and Katherine (Kenniger) Becherl. He graduated from Binford High School in Cooperstown with the class of 1943. He attended a two year trade school, the School of Science & Industry, in North Dakota.
Richard served for our country in the U.S. Army in the South Pacific on the island of Okinawa during the Korean Conflict. He was Honorable Discharged in 1952.
In LaPorte, Indiana on April 8, 1961, Richard took as his wife the former Sallie S. Roush.
He worked for a Mayo-Clinic in Minnesota doing printing and then as a line type operator for the LaPorte Harold Argos Newspaper. He took on various other printing positions before joining Bendix in South Bend, from where he retired. But not wanting to stop working completely, Richard worked the holiday season at Claeys Candy in South Bend until his health would no longer allow.
In his younger years, he enjoyed playing ball with his son and daughter. He loved outdoor work, and spent a lot of his talent doing woodworking, building birdhouses and lighthouses. His grandkids fondly remember making birdhouses with him. Richard was very involved in learning his familyâ€™s German genealogy, and his family and he took many trips back to his hometown in North Dakota through the years.
Richard served as a Sunday school teacher and Superintendent, as well as a Deacon, at the First Baptist Church of North Liberty. His faithfulness to his church was very important to him.
The family would like to extend a thank you to the PCU staff at St. Joseph Regional Medical Center, Mishawaka, for their extraordinary care given to Richard during his time there.
He is survived by his loving wife of 55 years, Sallie, of North Liberty, and their son and daughter, Mark (Kay) Becherl of South Bend and Shona (Jerry) Hojara of Elkhart; 3 grandchildren: Sondra (Dean) Taylor, Alysia Frazier and Tiffany (David) Pettifor; and 5 great-grandchildren: Gabriel, Olivia, Ezra, Lilah and Lucas.
Richard was preceded in death by his parents and siblings.
Visitation will be held from 5-7 p.m. on Friday, November 4, 2016 in the Johnson-Danielson Funeral Home, 1100 N. Michigan Street, Plymouth.
Funeral services will be held at 11 a.m. on Saturday, November 5, 2016 in the First Baptist Church of North Liberty, 407 Elm Street, North Liberty. Visitation will resume one hour prior to the start of the service.
Burial will follow in the Center-Polk Cemetery, LaPaz.
Memorial contributions can be made to the First Baptist Church of North Liberty.