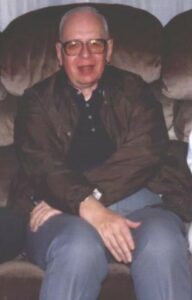 Richard O. “Dick” Salomon, 77, died in his home, 1111 Chester St., Plymouth, at 10:47 a.m. on Friday, June 23, 2006.
An icon among journalists in Northern Indiana, Dick retired as the Bureau Chief of the South Bend Tribune’s Plymouth office in December of 1991. For 32 years, he was the main—sometimes the only– staffer in the office. He covered everything from county and city government, school boards, feature events, the Kankakee River Basin Commission and local politics.
And he did it well.
He was known for his fairness, his honesty and for his total commitment to his job. Fellow Tribune colleagues remarked that Dick was one of the most private men that they had ever known. He paid attention to detail and, they said, “His mind was like a steel-trap. He remembered everything.” He never used a reporter’s notebook, instead he wrote his information on a folded-up piece of paper he kept in his jacket pocket. Hundreds, if not thousands, of those pages are still stored in Tribune archives.
Dick would get more accurate facts from his notes then most people would from several notebooks.
He was an absolute authority and genius –calling himself a “freak”—about interurban railroads. He said that he knew everything about them –“more than anyone else could ever know.”
Born in Fort Wayne, Indiana, on May 5, 1929, the son of Walter and Louise Salomon, Dick graduated from Northside High School. He earned a Bachelor of Arts from Valparaiso University in 1951, majoring in Geography.
A veteran of the United States Army, Dick served in the Korean War from August of 1951 to July of 1953. He earned a Korean Service Medal with three bronze service stars and a United Nations Service Medal.
He’d laugh and say the “best thing about the service was the Korean beer.”
He was always a newspaper man, delivering the Fort Wayne Journal-Gazette as a youngster. He began his journalism career at the Logansport Press and later worked at the Muncie Star before joining the Tribune in January of 1960.
When he retired from the Tribune he said that he had no definite plans except that he “would no longer be getting up in the dark.”
He stayed in touch with fellow news people and was a valuable asset as anchorman on the Tribune’s Quiz Bowl team that competed in the Plymouth Library’s annual competition.
Dick is survived by two nephews and a niece: Alan Miller of Fort Wayne, Douglas Miller of San Antonio, TX, and Cathryn Miller of Seattle, Wash. Also surviving is his journalism protégé and long time friend, Linda Mullen Clevenger, Bremen.
He was preceded in death by his parents and by a sister, Hildegarde Miller.
Graveside services will be held in Concordia Cemetery in Fort Wayne at 10 a.m. on Tuesday, June, 27, 2006.
The Johnson-Danielson Funeral Home is in charge of arrangements.
Memorials in Dick’s memory may be made to the Salomon Farm Park, 817 W. Dupont Rd., Fort Wayne, IN 46825.