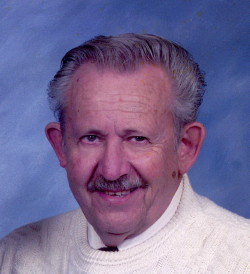 Born in Wieser, Idaho on April 14, 1937 he was the son of Lyman D and Ruth M (Horner) Arrasmith. Richard lived in a log cabin on a dirt farm as a child moving to Spokane, WA then to Pacific Beach, CA where he attended Mission Bay High School and was a graduate of the class of 1955.

Working in grocery stores during high school he then moved to Los Angeles working for Douglas Aircraft and then eventually Lockheed. He worked for Ryan Aircraft in San Diego before moving to the Grand Canyon for a few years working in the hotel industry. Finally, he moved to Indiana where he worked for Coca-Cola. Not one for staying still, he drove for a local trucking firm and for grocery stores until he officially retired. After retiring he enjoyed his passion of woodworking and fishing.

Richard was baptized by Pastor Lawson Byrd at Star City Church of Christ on April 25, 1993.

He is survived by his wife Nancy of Koontz Lake; daughters: Karen Siemsen of Scott Mills OR, Patricia Lopez of Portland, OR, Connie Coffer of San Pierre, IN, Pamela Bellanca of Elizabethtown, NC; step-children Evelyn (Dave) Shields of Argos, James (Jamie) Alton of Spring, TX and Josephine Horon-Allee of North Judson, IN; 17 grandchildren, 11 great-grandchildren and his beloved nieces and nephews.

Richard was preceded in death by his parents, two daughters Penny and Lisa Arrasmith and his three brothers.

An immediate burial will take place on Monday November 30, 2020 at 12 p.m. in the Grovertown Cemetery with Life Celebrant James Smart officiating.

Memorial contributions can be made to the American Cancer Society, 130 Red Coach Dr. Mishawaka, IN 46545.