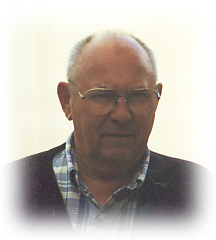 A resident of 14389 Maple Road since 1970, Richard W. “Spud” Holderman, 80, died on Friday, July 29, 2005, in the home of his family. Diagnosed with cancer in February of this year, he lost his battle at 8:15 p.m. surrounded by and in the loving care of his family.
Born at home near Etna Green, Ind., on October 7, 1924, Spud was the son of Nicholas and Katie Wyman Holderman. He graduated in 1942 from Etna Green High School and attended Tech school in South Bend before enlisting in the United States Navy to serve his country during World War II.
On October 26, 1953, Spud and Lura M. Ringer were married in Etna Green. Lura died just eight months ago on November 29, 2004.
Spud was a machinist for 41 years for the Bendix Corp. He faithfully worked from 1944 until his retirement in 1985.
His retirement days were spent enjoying his grandchildren, gardening and his favorite sport – fishing. He and Lura spent many winters traveling to Riverview, Florida.
He was a member of the Masonic Lodge in Bourbon, the Scottish Rite Temple – Valley of St. Joe and of the Jordan Baptist Church.
Spud is survived by three daughters and two sons. His daughters are: Linda S. and Annis Crum, Argos, Ind.; Cindy L. and Glenn Leonard, Bourbon, Ind.; and Patti L. Honeycutt, Monterey, Ind.
His sons are Steven K. and Debby Holderman, Augusta, Kan. and Terry L. Holderman and Araminta, Plymouth, Ind.
Eight grandchildren also survive. They are: Linda’s children Mandy, Lisa and Mitchell; Cindy’s children Krissa and Melissa; Patti’s children Kyle, Kevin and Jeffrey as well as three great-grandsons; Derek, Christopher and Wade.
A brother, David and Ursula Holderman, Etna Green, Ind., and two sisters, Donnabelle Davis, Plymouth, Ind., and Phyllis Holderman of Etna Green, Ind. along with several nieces and nephews survive as well.
Spud was preceded in death by his parents, his wife, a brother, Forrest Holderman and three sisters: Mary Miller, Evelyn Sickman, and Virginia Holderman.
Friends will be welcomed by Spud’s family from 4 to 8 p.m. on Monday, August 1, 2005, at the Johnson-Danielson Funeral Home, 1100 N. Michigan St., Plymouth. Visitation for those unable to come on Monday will also be held after 7 a.m. on Tuesday morning, August 2, 2005, prior to the funeral on Tuesday, August 2, at 2 p.m. in the funeral home.
Mark Fishburn, pastor of the Argos Bible Church, will officiate. Burial will be in the New Oakhill Cemetery, Plymouth.
Memorial gifts may be made in Spud’s memory to the Marshall County Cancer Society or to the Marshall County Hospice.