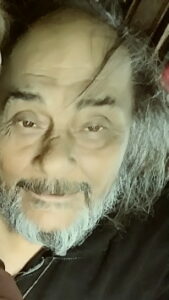 Lifetime Plymouth resident Ricky A. â€œRed Wolfâ€ Rhoads Sr., 58, passed away on Monday evening, March 18, 2019 at Memorial Hospital of South Bend.
Born in Plymouth, Indiana on February 17, 1961, Ricky was the son of Norman D. and Maudie I. (Gaines) Rhoads. He attended Plymouth schools.
On July 5, 1996 in Plymouth, Ricky married Angela L. Turner.
Ricky worked for Plymouth Foundry Inc. and then for Masonite in Walkerton as a laborer for many years.
He was an avid fisherman and hunter, and Ricky enjoyed being outside any chance he had. He loved being with his children and grandchildren. Ricky was a member and Past Chief of the Indiana Hawk Band of MÃ©tis Shadow Sept. His native bloodline was Cherokee and Algonquin. He enjoyed native crafting, making dream catchers and staffs for many.
He is survived by his wife, Angela, and his children: Ricky Rhoads Jr, Shawn (Katherine) Rhoads, Fawn Rhoads (Robert Jackson), Angela Rhoads (Brandon Crawford), Cody Rhoads, Mason Rhoads and Chanoa Rhoads; 18 grandchildren and 1 great-grandchild. Also surviving are his siblings: Norm Rhoads, Dennis Rhoads, Darwin Rhoads and Martha Guerra.
Ricky was preceded in death by his parents, Norman and Maudie, and his siblings: Marilyn Morreno, Linda Williams, Lena Rhoads and Ron Rhoads.
No services are scheduled at this time. In lieu of flowers, memorial contributions can be made to the family to help with expenses.