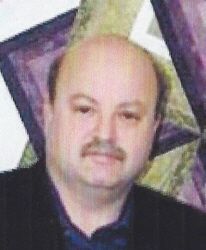 Ricky J Kline, formerly of Ligonier, IN passed away in Indianapolis, unexpectedly Sunday morning September 29, 2013 at the age of 53. He was born on May 31, 1960 the son of Oscar Edward and Marguerite Irene (Randol) Kline in McCray Hospital. On September 29, 1991 he married Patricia G. Collins; she survives. Also surviving are his children, Ian, Gia, Kia, and Patrick; one grandchild, Kaci Rae; siblings, Karen (Charles) Anglin of Cromwell, Calvin (Julie) Kline of Syracuse, and Randy Kline of Ligonier. He was preceded in death by his parents; a brother, Kenny Kline and a sister, Connie Parsons.
Rick was a 1979 graduate of West Noble High School and later earned a degree in Mortuary Science from Mid-America College of Funeral Service. He was a member of the Pi Sigma Eta National Morticians Fraternity. During his career worked for and assisted in many area funeral homes including Billings Funeral Home, Johnson-Danielson Funeral Home, Sheets & Childs Funeral Home, Ulrey-Renner Funeral Home, Brazzell Funeral Homes, Walkerton Funeral Home, and MC Smith Funeral Home, and Yeager Funeral Home as well as many others. He owned and operated Kline Funeral Home in Millersburg, IN until 2009. Rick had been a Jehovah’s Witness for 42 years. Rick had a sincere passion for people and was always willing to lend his time & talents to anyone he could help. He touched many lives and will be greatly missed. Though now gone ahead of us, he will always be remembered for his honest heart, selfless love, and of course, the corny jokes he loved to tell. A funeral service will be held in Rick’s honor on Thursday October 3, 2013 at 2 p.m. in the Yeager Funeral Home, 1589 Lincolnway South, Ligonier, IN. Burial will follow at Oak Park Cemetery in Ligonier.
Friends & family will be received from 11 a.m.-2 p.m. prior to the service on Thursday. Memorial contributions may be given to the family for his son Patrick’s education.