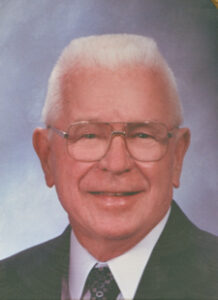 Riley Paul Fieser, 86, of 1285 S. 1200 E., Culver, Indiana, died at 2:55 p.m. on Friday, March 23, 2007, in the LaPorte Hospital, LaPorte, Indiana.
Riley was born in Knox, Indiana, on January 27, 1921, the son of Rollie David and Lydia Ransbottom Fieser.
In World War II, Riley served his country as a Sergeant in the Cavalry . He enlisted in Indianapolis in 1944, and was discharged in 1945.
On July 26, 1940, in South Bend, Indiana, Riley and Marie Wood were married. Marie died on October 19, 1998. He later married Doris Bily on February 19, 2000, in Hobart, Indiana.
A salesman, he was employed by Tri-Supply Company and Thompson Hayward Chemical Company for 20 years, retiring in September of 1981. He also worked for the Studebaker Company in South Bend for 14 years.
He lived in South Bend, Indiana for 12 years, LaPaz, Indiana, for 7 years and later at Gary, Indiana, Appleton, Wisconsin, Shawano, Wisconsin, Port Charlotte, Florida, and Knox, Indiana. Riley was a member of the Masonic Lodge 349 in Appleton, Wisconsin, the Scottish Rite in Green Bay, Wisconsin, and the Shriner Beja Temple, also in Green Bay.
He is survived by his wife, Doris, Culver, Indiana, and by two daughters, three sons, and four step sons.
His daughters are: Sharon (Rudy) Tinglof, Culver, Indiana, and Carol Fieser, Greenville, Wisconsin.
His sons are Jerry (Rose) Fieser, Hebron, Indiana: Roger (Linda) Fieser, Arlington Heights, Illinois, and Riley D. (Mary) Fieser, Greenville, Wisconsin.
His step sons are Robert Bily, Northlake, Illinois, Michael Bily, Wheaton, Illinois, Thomas Bily, Corpus Christi, Texas, and David Bily, St. Charles, Illinois.
Riley is survived by nine grandchildren and 10 great grandchildren
A sister, Linnie Marie Risner, Deland, Florida, also survives.
Riley was preceded in death by his parents, his first wife and a brother, Richard L. Fieser.
Friends will be welcomed by Riley’s family to celebrate his life and share memories from 3 to 7 p.m. E.S.T. on Sunday, April 1, 2007, and will continue Monday morning after 7:00 a.m. E.S.T. at the Johnson-Danielson Funeral Home, 1100 N. Michigan St., Plymouth.
Visitation will also be held one hour prior to funeral services at the church. Services for Riley will be held at 1 p.m. in the Pretty Lake Trinity United Methodist Church, 8985 State Road 17, where he was a member, on Monday, April 2, 2007. The Rev Jim Irwin pastor of the church, will officiate.
Burial will be in Burr Oak Cemetery, Culver, Indiana.
Memorial gifts in Riley’s name may be made to the church.