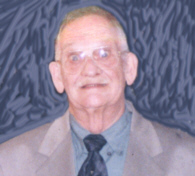 Robert A. “Bob” Miller, 78, of 2601 Oakland, Elkhart, IN, died in Elkhart General Hospital at 2:46 p.m. on Tuesday, March 22, 2005, following an illness. Bob moved from Michigan to Plymouth, IN, in 1943, and to Elkhart in 1998.
Born in Kalamazoo, MI on July 30, 1926, Bob was the son of Robert K and Helen Burlingham Miller. He graduated from Kalamazoo Central High School and attended Arkansas State Teachers College.
On April 12, 1951, in Plymouth, Bob and Della J. Lacher were married. Della died on July 20, 2000.
Bob was a Veteran of W.W. II, and had worked for Bethleham Steel for 22 years as a strand operator, retiring in 1987. An avid golfer, he worked at Swan Lake Golf Course after he retired. He enjoyed reading and listening to Jazz music.
Just prior to, and following his military service, Bob played Professional Minor League Baseball in Kingsport, TN and Borger TX. He played on the Plymouth Merchant League in 1948 and 1949.
Bob was a member of the Plymouth American Legion and Moose Lodge.
Bob is survived by a daughter, Lisa and Brian McKee of Plymouth, IN and two sons: Kurt and Debra Miller of Elkhart, IN and Brent and Faith Miller of LaPorte, eight grandchildren and four great-grandchildren.
Two sisters and two brothers also survive. They are: Dythia Miller of Mena, AR, Rosie and Larry Lowry of Walkerton, IN, Bruce E. Miller of East Amhurst, NY, and Douglas and Betty Miller of Plymouth.
Bob was preceded in death by his parents and a brother, Charles Miller.
Visitation with Bob’s family will be on from 2 to 4 p.m. on Friday, March 25, 2005 in Johnson-Danielson Funeral Home, 1100 N. Michigan St., Plymouth.
Funeral services, conducted by Bob’s brother, Bruce Miller, will be held at 4 p.m. Friday, March 25th, in the funeral home.
Interment will be in Oakhill Cemetery, Plymouth, IN.
Memorial gifts in Bob’s memory may be made to a charity of the donor’s choice.