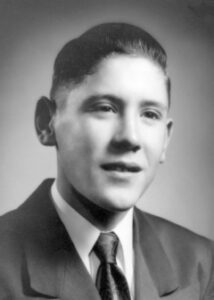 Robert A. “Bob” Richard, 74, died at 6:35 a.m. Wednesday, December 8, 2010 in the Life Care Center at Rochester, Ind. due to natural causes. It was fitting that he should receive his Heavenly Reward on the Feast Day of the Immaculate Conception in honor of Christ’s mother Mary as he always held great devotion to her.
The son of Charles A. and Agnes H. (Crist) Richard, Bob was born at home on the farm, the youngest of ten children on a cold 29th day of February in 1936. Bob was an exceptionally gifted child who graduated from St. Michael Elementary School and was the Valedictorian of his Argos High School Class in 1954. Bob then graduated with honors from the International College of Commerce in Ft. Wayne, Indiana.
Bob went on to work for the Farnsworth Electronics Co. in Ft. Wayne. He felt called to the ministry and entered the seminary. Although he did not continue into the priesthood, Bob led a devote life filled with the Spirit.
A lifetime member of St. Michael’s Roman Catholic Church, Bob served as an usher for many years.
Survivors include two brothers; Lewis Richard of Plymouth, Raymond Richard of South Bend along with two sisters; Lucy Schlosser of Plymouth and Judy Stevenson of Bayfield, Colorado and many nieces and nephews.
He was preceded in death by his parents, siblings; Martha Zeiger Barker, Loyola Davis, Mary Richard, Joseph Richard, and George Richard.
Friends may call at the Johnson-Danielson Funeral Home on Sunday from 1 – 3 p.m. where a Rosary will be recited at 3 p.m. Mass of Christian Burial will be celebrated at 11 a.m. Monday, December 13th in St. Michael Catholic Church, 613 N. Center Street, Plymouth, where friends may call after 10 a.m. until time of services. Fr. William Kummer will celebrate the Mass.
Burial will follow in the New Oakhill Cemetery, Plymouth.
Memorial gifts may be given to St. Michael Parish, 612 N. Walnut Street, Plymouth, IN 46563
Notes of condolence may be sent to the family through the web-site: www.johnson-danielson.com
Funeral Director: Randall L. Danielson