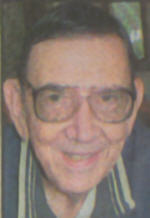 Robert “Bob” Bartlett, 77, 16492 Pretty View Drive, a Plymouth resident since 1990, died in the Ironwood Health and Rehabilitation Center, South Bend, following an illness, at 5:30 a.m. on Wednesday, April 9, 2003. A respected and beloved person with a wonderful sense of humor, his loss to the community and to his friends and family will be a big one. Bob had lived in Downers Grove, Ill., for 50 years where he was born the son of Leroy S. and Helen M. Weber Bartlett, on October 20, 1925. A 1943 graduate of Downers Grove High School, he enlisted in the United States Army in January, 1944. He was 17 years old. “My friends were already in the service,” he said, “and I wanted to serve my country too.” He was a member of the 1269th Combat Engineers of the 3rd Army.
“W.W. II.” he said, “was a life-altering experience. I was proud to serve. I grew up in a hurry. We all did. American answered the call then…and she will again whenever it is necessary.”
Honorably discharged as a sergeant on April 2, 1946, he entered North Central Illinois College the following fall. The 6-foot-7 20-year- old played forward for the varsity basketball team, graduating in 1950.
With his degree in business administration, he had always been in the newspaper business in advertising and sales. He first worked at The Reporter in Downers Grove, Ill.
On March 13, 1954, in Downers Grove, Bob and Joan Schroeder were married and in 1975, the young couple moved to San Francisco, where he was the advertising and sales manager for 15 years for Lesher Publications, retiring in 1989.
Bob was a member of the Plymouth High School Athletic Boosters Club and a substitute driver for Meals on Wheels in Plymouth. He enjoyed golf, basketball and traveling. A golfer, gin and domino player, he was a great part of the fun of the games at the Plymouth Country Club where he had been a member for the past 13 years.
He was a past president and member of the Downers Grove Lions Club and had been a member of the Presbyterian Church in both Downers Grove, Ill. and Lafayette, Calif.
Bob is survived by Joan, his wife of 49 years, and their two daughters; Patricia and her husband, Stephen Emslie, Palo Alto, Calif., and Judy Bartlett, South Bend, Ind.
A sister, Helen Bartlett, Plymouth; a grandson, Alex Emslie, Palo Alto, Calif., a granddaughter, Caitlin Bartlett, South Bend, and several nieces and nephews, survive as well.
Bob was preceded in death by his parents and two brothers: Leroy and Albert.
Memorial services will be at 1:00 p.m. on Saturday, May 10, 2003, in Johnson-Danielson Funeral Home, 1100 N. Michigan St., Plymouth, Indiana.
Memorial gifts in Bob’s memory may be made to Habitat for Humanity.