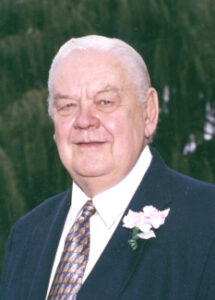 Robert Charles Arvesen, 83, of Plymouth, died on November 18, 2012 at Saint Joseph Regional Medical Center. Bob was born March 22, 1929, in Chicago to Walter and Irene Arvesen. He and his family moved to Plymouth in 1968, where he served as Industrial Sales Engineer for Sinclair Refining and Atlantic Richfield Companies. He later owned and operated Arvesen’s True Value Hardware in Plymouth for ten years, after which he served as Superintendent of the City of Plymouth Street Department from 1990 to 2000. He served faithfully on the Board of the Plymouth Community School Corporation for over twelve years, serving two terms as President.
Bob served in the United States Air Force and was stationed in England and Germany during the Berlin Airlift following World War II. He was a Charter Member of the local Elks Lodge, a member of American Legion Post 27, a Life Member of VFW Post 1162, and a member of the Fraternal Order of Police Lodge 130. He was an enthusiastic reader, puzzle solver, hobbyist, and inquisitive self-taught person. He especially loved gospel, opera and jazz music and was a noted die-hard Chicago Cubs and Bears fan. In 1951 Bob married Patricia Earl in Evergreen Park, Illinois. Patricia passed away in 1963. Bob married Janet Van Asten in 1964 in Riverdale, Illinois. Janet passed on in 1983.
Bob is survived by his daughter Nancy Bice of Marshall, MI, daughter-in-law Paula Arvesen of Plymouth, son Jerry (Janice) Arvesen of Bloomington, IN, daughter Karen Green of Plymouth, daughter Patty Pynaert of Plymouth, and son Eric Arvesen of Plymouth. He was preceded in death by daughter Barbara Arvesen in 2009 and son Mark Arvesen in 2012. Bob is also survived by twelve loving grandchildren Melissa (Mark) Wilton, Nicholas (Jamie Lynn) Bice, Scott (Tricia) Arvesen, Stacy (Tony) Bennitt, Patrick (Samantha) Arvesen, Daniel Arvesen, David Arvesen, Joseph Green, Andrew (Lynn) Green, Lisa Green, Tara Pynaert and Tia Pynaert, and twelve great-grandchildren. Roberto (Doris) Mata Naranjo, of Costa Rica, is a special son whom Bob and family hosted for a year as a foreign exchange student. Also surviving are sister Irene McQuaid, sister Barbara (Earl) Devereaux, and brother Walter (Mary) Arvesen, all of Palos Hills, Illinois. A sister, Delores Sarsfield, preceded him in death.
Visitation will be at Johnson-Danielson Funeral Home, 1100 North Michigan Street, Plymouth, IN on Tuesday, November 20 from 4:00 – 8:00 pm. A funeral service will be held at the funeral home on Wednesday, November 21 at 10:00 am with Philip R. ‘Rick’ Gaul officiating. Burial will be at New Oakhill Cemetery in Plymouth with Military Funeral Honors provided by members of the Plymouth American Legion Post 27, Veterans of Foreign Wars – Marshall County Post 1162 and the D.A.V.
Memorial contributions may be made to St. Jude Children’s Research Hospital, Memphis, TN www.stjude.org, or St. Joseph’s Indian School, Chamberlain, SD www.stjo.org.