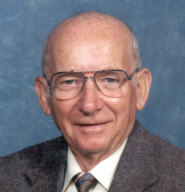 Robert “Bob” Cook, 83, a lifetime Plymouth resident, died suddenly, of natural causes, at 8:27 a.m., Friday, January 30, 2004. Bob died at his home, 7238 Lilac Road, Plymouth.
A friendly and familiar fixture in the city of Plymouth, Bob Cook was born here on November 1, 1920. He was the son of Fredrick and Cecile (Chase) Cook.
He graduated from Plymouth High School in 1938 and went to work at the C.L. Morris Lumber Co.
Four years later, during W.W. II, in 1942, he enlisted in the United States Navy. He served as a signalman on a Liberty Ship, the armed guard of the Navy. He handled communications within the fleet of transport vessels that supplied the armed forces with landing craft, K rations, rifles and medical supples.
On D-Day, while Bob rode the choppy waves offshore of Omaha Beach, his lifelong friend, Sam Shaffer, crawled the hedge rows of St. Lo.
A civilian again, Bob and Margaret McKee were married on July 25, 1948, in Plymouth.
He worked for the C.L. Morris Lumber Co. for 28 years. As a high school kid he had earned 20 cents an hour there and was tickled to get it. In 1969, went to work for the Young Door Company where he remained for the next 20 years.
Up until a couple of years ago, for 11 years, Bob and Sam, together again, worked as “The Widder’s Friends.” They volunteered their time and talents: putting up screens, cutting off doors, whatever the ladies needed.
Bob’s pride and joy was his beautiful lawn. He enjoyed doing yard work and his favorite pastime was mowing the lawn. A Green Bay Packers’ fan, he had great times with his family and fun on Canadian fishing trips.
He was a member of American Legion Post #27.
Bob is survived by Margaret, his devoted wife of 55 years and their two children: Marcia A. Cook and David A. Cook, all of Plymouth. Several nieces and nephews survive as well.
Bob was preceded in death by his parents; Betty Rinard-Merley, a sister; and Charles Cook, a brother.
Friends may call on Sunday, February 1, 2004, from 2 to 6 p.m. at the Johnson-Danielson Funeral Home, 1100 N. Michigan St., Plymouth.
Funeral services for Bob will be on Monday, February 2, 2004, at 10:30 a.m. in the funeral home. The Rev. David Kerkove, pastor of the Plymouth Church of the Brethren will officiate.
Military graveside honor services will be provided by the Plymouth VFW Post 1162.
Interment will be in New Oakhill Cemetery, Plymouth.
Memorial gifts in Bob’s memory may be made to the American Heart Association or to a charity of the donor’s choice.