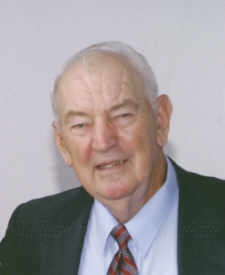 Robert C. Richards, Sr., 79, 20284 Lincoln Highway, Plymouth, died at 1:38 p.m. on Tuesday, January 2, 2007, in Saint Joseph Regional Medical Center, Plymouth, of an apparently unexpected heart attack.
Robert was born the son of John H. Sr., and Riddie (Gilliam) Richards in Rogersville, Tennessee, on December 16, 1927. There he was raised and graduated from Rogersville High School.
On January 21, 1949, in Bloomington, Illinois, Robert and Marjorie E. Stoddard were married. Marjorie died on August 23, 2006.
Robert was self-employed. A known ‘workaholic,’ he was the owner-operator of Richard’s Saw Mill for over forty years.
He played the guitar and sang in his younger years and always enjoyed music. His favorite breed of horse was the Appaloosa.
Robert is survived by three sons. They are Robert C. Jr. and Barbara Richards, Plymouth: Jerry A. Richards, Donaldson, Indiana, and John C. and Lee Ann Richards, Blowing Rock, North Carolina. Grandchildren include; Rob Richards III, Glenn Goss, Brian Goss, Nikki Kennedy, Jerry Richards Jr., Brittany Richards, John Ryan Richards, Michael C. Richards and David Chance Richards.
Seven sisters and three brothers survive. They are: Carolyn and Fred Ball, Dorothy Gorbea, Elizabeth Collier, Alice and Bascom Mayes, Nell and Jimmy Collins and Mary Gilliam, all of Rogersville, Tennessee and Molly Albright of Greenville, Tennessee. Brothers are: Charles L. and Maxine Richards, Wm. Douglas Richards and George Richards, all of Rogersville, Tennessee. Numerous nieces and nephews also survive.
Robert was preceded in death by three brothers: Arthur J. Richards, John H. Richards, Jr. and James P. Richards and two sisters: Virginia L. Richards and Mattie Gilliam.
Family services will be held with the Rev. Vernon Hargrove, pastor of the United Church of God where Robert was a member, officiating.
Burial will be in the Swedish Cemetery, north of Donaldson, Indiana.
Memorials in Robert’s memory may be given to a charity of choice.