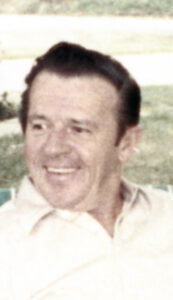 Robert D. “Bob” Zimmerman, 88, a lifetime area resident, died at his home following a cancer related illness at 8:40 p.m. Wednesday, March 19, 2014, in the care of his family and Hospice.
Born in Bourbon on May 11, 1925, he was the son of Harvey Willard and Edna P. (Keyser) Zimmerman. Bob graduated from Bourbon High School in the Class of 1943.
Bob had served in the U.S. Army during W.W. II.
On September 17, 1950 in Plymouth, he married Geraldine Amones, who preceded him in death on August 23, 2002. They were winter residents to Avon Park, Florida for 22 years.
Bob had worked for Schlosser Brothers Dairy as a truck driver for 12 years. He then worked with Keith Nash as a painter for over 30 years. He enjoyed fishing in Florida, watching basketball and football, and flower gardening, taking great care of his property and landscaping. He enjoyed the annual hunt for mushrooms in the State of Michigan for over 20 years.
He attended the Faith Baptist Church of Plymouth and had been a member of the Plymouth American Legion Post 27 and the Veterans of Foreign Wars – Marshall county Post 1162. Bob is survived by a sister, Dorothy Carswell of Bourbon and numerous nieces and nephews.
He was preceded in death by his parents and a brother Carl Zimmerman.
Family and friends are invited to gather from 1 to 3 p.m. on Sunday, March 23, 2014 in the Johnson-Danielson Funeral Home, 1100 N. Michigan St. Plymouth. Funeral services will immediately follow at 3:00 p.m. The Rev. Paul Whitworth, pastor of Faith Baptist Church will officiate.
Military honors will be accorded Bob at the funeral home by members of the D.A.V., Plymouth American Legion Post 27 and Veterans of Foreign Wars – Marshall County Post 1162.
Entombment will be in the New Oakhill Mausoleum, Plymouth
Memorial gifts in Bob’s memory may be made to the Center for Hospice Care, 112 S. Center Street, Plymouth or the Faith Baptist Church, 12987 Peach Road, Plymouth.