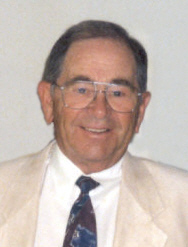 Robert E. “Bob” Pendergast of 10200 Pretty Lake Trail, Plymouth, Ind. passed away on January 6, 2004 at Miller’s Merry Manor in Culver, Ind. after enduring an extended illness. He lived in Plymouth since 1956.
Bob was born on March 3, 1924 in Brockton, Massachusetts where he grew up as the first of two sons of Edward and Arlene (Johnson) Pendergast.
He served his country bravely during WWII where he earned a Purple Heart as a member of the Army’s 746th Tank Battalion, and participated in the second wave of the D-Day invasion on Utah Beach. Honorably discharged in December 1945, Bob went on to graduate from Bethany College as a history major / economics minor.
Bob first had a successful career in insurance with Liberty Mutual Insurance Company and later with Northwestern Mutual Insurance Company where he became responsible for the Midwest region. In April of 1970 after a short stint with the Chicago Auto Club, Bob purchased the Plymouth Dairy Queen which he built into the thriving business for which he became so well recognized. Bob also owned the Dairy Queen in Bourbon, Ind. from 1971 to 1976 as well as Pendy’s Stop-N-Go, a Plymouth convenience store he owned until his death. Bob sold the Plymouth Dairy Queen and retired in April of 1990.
On September 9, 1974 in the Culver Military Academy Chapel, Bob married Carol Lee (Amor Rosander). Surviving with Carol is their blended family of seven children: son David Pendergast of LaPorte, Ind., daughters Nancy (Bob) Rigney of Shelbyville, Ky., and Sharon Pendergast of Houston, Tex., and stepchildren Kathryn (Norm) Wineholt of LaPorte, Ind., Carl (Melanie) Rosander of Cassopolis, Mich., Lloyd (Sherry) Rosander of Grovertown, Ind., and Dawn (Jerry) Slein of Plymouth, Ind. Bob (Gramps) had eleven grandchildren and four great grandchildren. Also surviving is Bob’s younger brother Donald (Marge) Pendergast of Brockton, Mass., his Aunt Ruth and Uncle Pete Duffy and several nieces and nephews.
Preceding Bob in death were his parents, an infant brother, several close Aunts, and his niece Lynn Pendergast Bruce.
Bob served as President of the Indiana Dairy Queen Association from 1984-1990, and was ADI Chairman for International Dairy Queen for several years. A member of the Republican party, he took interest in all levels of government and was a member of several service organizations including Rotary, in which he was most active. Bob held a special regard for Ancilla College and was an active supporter of it’s programs.
He was a Plymouth Country Club member since 1957 and was a past board member. An avid golfer, Bob found tremendous delight in making a long putt on the 18th hole! As a cardplayer, he played a mean hand of ‘gin’ and enjoyed sports as well. A die-hard Cub fan, Bob enjoyed taking his kids and grandkids to Wrigley Field where he treated them like VIPs. He frequently attended area sporting events and was a supporter of athletics for Plymouth High School and Ancilla College. He was also a history buff and possessed a significant amount of books and videos pertaining to WWII. Bob and Carol enjoyed traveling and saw much of the world together. A generous and loving husband, father and grandfather, Bob was a member of the Plymouth First Presbyterian Church.
Family and friends will gather at the Johnson-Danielson Funeral Home, 1100 N. Michigan St. Plymouth on Saturday, January 10, 2004 from 4 – 7 p.m.to celebrate Bob’s life. Funeral services will be held on Sunday, January 11th at 1:30 p.m. in the funeral home, the Rev. Steven Mullin, Pastor will officiate. Burial will follow in the New Oakhill Cemetery, where military graveside honors will be accorded him by the members of the Veterans of Foreign Wars, Marshall County Post 1162.
Memorial gifts may be made to Ancilla College, c/o Institutional Advancement, P.O. Box 1, Donaldson, Indiana 46513