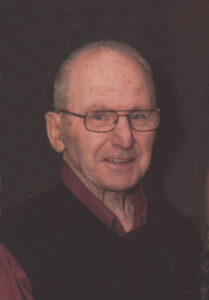 Robert E. Harris, 83, of 108 Eastwood Drive, Plymouth, passed away at his home due to natural causes Friday evening September 12, 2014.
Bob was born in Bippus, Indiana on November 25, 1930, the son of Harry H. and Juanita (Reece) Harris. The family moved from Allen County near Ft. Wayne to Plymouth in 1937. A 1948 graduate of Plymouth’s Lincoln High School, Bob played football all four years and was active in Rural Youth where he would meet his future wife. In service to his country, he went active duty in the U.S. Marine Corps on August 9th 1951 during Korean Conflict.
On February 6, 1965 in the First United Methodist Church in Plymouth, he took as his bride the former Beverly J. Birk, a union that spanned nearly 50 years together.
Bob joined the workforce of Moriarty Buildings in Argos for over 20 years, which then became Wickes. At its closing he then worked for Morris Lumber in Plymouth and in 1993 he retired from Bomarko. For nearly 18 years, Bob assisted Sam and Dave Goeble with Oak Crest Auction Service.
As a young adult, Bob taught square dance lessons in a number of locations and also enjoyed the polka. He assisted with the founding of the Marshall County Youth Football League and coached for 11 years and was involved in Little League Baseball.
Bob brought his competitive nature to most activities including family euchre games and pool tournaments. He enjoyed golf, fishing, cooking and grilling out along with a deep appreciation for Ford Mustangs.
He loved his family, wife Bev, son Douglas Steven and wife Angela Harris of Greenwood, Indiana with children; Celeste, Adrienne, Joshua and Jonah, daughter Jennifer Anne and spouse Robert Fogle of Plymouth and Skyler and a daughter Penny Lynn Harris of Cleveland, Ohio. A brother Phillip Richard Harris resides in South Bend and several nieces and nephews also survive.
Bob was preceded in death by his parents, an infant son Scott Allen Harris on January 25, 1968, son Robert Allen “Rob” Harris on June 29, 1991, a brother Harry Harris and two sisters Ruby Samuelson and Mary Horn.
Family and friends will gather at the Johnson-Danielson Funeral Home, 1100 N. Michigan St. Plymouth on Tuesday, September 16th from 4 – 8 p.m. Funeral services will take place in the funeral home at 11 a.m. on Wednesday, September 17th with Pastor Larry Marhanka officiating.
Burial will follow in the New Oakhill Cemetery with Military Honors accorded him by members of the Plymouth American Legion Post 27, Veterans of Foreign Wars – Marshall County Post 1162 and the D.A.V.
Memorial gifts may be made in his name to the First United Methodist Church, 400 N. Michigan St., Plymouth, IN 46563 or Marshall County Humane Society, P.O. Box 22, Plymouth, IN 46563.