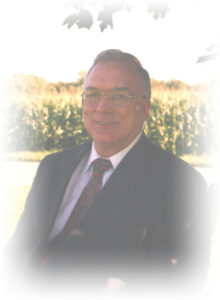 Robert E. “Bob” Hundt, 69, an area resident all of his life, died at 6:10 a.m. on Tuesday, March 8, 2005, at his home, 13680 W. 5C Road, Plymouth, Ind.
Bob, who had suffered from a cancer related illness for a number of years, died under the loving care of his family and the Marshall County Hospice.
The local Hospice organization helped to care for Bob, one of their first patients, during the last 8 1/2 years of his life. Bob, in a newspaper interview in June of 1999, attributed his extended lifetime to the care of Hospice. Bob said then: “Whatever time I have left, I know I am in the hands of the Lord.”
And he was. And is.
He was born in Hanna, Ind., the fourth of 17 children of Arthur W. Sr., and Helen Hazen Hundt, on July 30, 1935. He attended Tyner High School.
On October 30, 1955, Bob and Bonnie M. McCoige were married in Argos, Ind. Married for 43 years, Bonnie died on July 19, 2000.
Bob first worked at Studebakers and had been a foreman at the Plymouth Foundry for 21 years before he started his own business. He became the owner-operator of Hundts Auto Parts where he worked for over 30 years.
An avid outdoorsman, he loved to fish and hunt. He liked to bowl and play golf, especially as a 10-year member of the Golden Boys Golf League. When he was able, he enjoyed spending the winters in Florida.
He was known for his wonderful smile, a firm handshake and a great sense of humor.
Bob was a member of the Calvary Lutheran Church of Plymouth and the Moose and Eagle Lodges of Plymouth.
He is survived by two children: a daughter and son-in-law, Becky and Terry A. Doody, Plymouth, and a son and daughter-in-law, Eugene and Leigh Ann Hundt, also of Plymouth.
Four grandchildren, a great-grandson and Mona Miller, a special friend, also survive.
Five brothers and their spouses survive as well. They are: Paul and Chris Hundt, Plymouth; Frank and Robin Hundt, Granger, Ind.; Richard and Loretta Hundt, Plymouth ; William and Donna Hundt, Bremen and George Hundt, Wheeling, Ill. Eight sisters and their spouses also survive. They are: Kathy Garza, Plymouth; Tina and Mike Walenga, Bremen; Barbara and Steve Harrington, Bremen; Lila and Bill Harmon, Fla.; Carolyn and David Colburn, Newark, Oh.; Judy and Richard Lowhagen, Fla.; Louella Powell, Plymouth and Patty and Ray Igleski, Wabash, Ind.
Bob was preceded in death by his parents; his wife; a brother, Arthur W. Hundt, Jr., and two sisters, Deloris Ogle and Beverly Davis.
Friends will be welcomed by Bob’s family to celebrate his life at the Johnson-Danielson Funeral Home, 1110 N. Michigan St., Plymouth, from 4 to 8 p.m. on Thursday, March 10, 2005, and continue after 7 a.m. Friday.
Funeral services for Bob will be held in the funeral home at 1 p.m. on Friday, March 11, 2005. The Rev. Tom Padberg, Chaplain of the Marshall County Hospice and Center for Palliative Care, the Rev. Steven Resner, pastor of the Calvary Lutheran Church and the Rev. Lloyd Howard, pastor of the Argos Church of Jesus Christ, will officiate.
Burial will be in New Oakhill Cemetery, Plymouth.
In lieu of flowers, memorial gifts to the Marshall County Hospice will be appreciated.