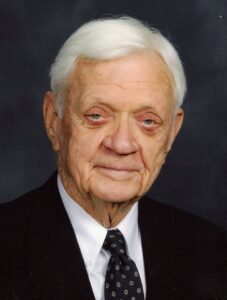 Robert “Bob” Jones was a beloved husband, father, grandfather, great-grandfather, brother, uncle and friend. He passed away suddenly on January 2, 2021 at the age of 96 in his hometown of Plymouth, Indiana.

Bob was born in Plymouth, Indiana on December 12, 1924 to Helen (Taber) and Aaron Jones. He graduated from Plymouth High School in 1942. Bob was a voracious reader and identified with the main character in his favorite book Robinson Crusoe. As a young wanderer, he attended different colleges before eventually becoming the first person in his family to graduate, receiving a degree in accounting from Arizona State University.

On June 14, 1943, Flag Day, he was sworn into duty for the Navy and during his service was an electrician. He served for five years before being honorably discharged.
Bob reconnected with the love of his life, Sarah “Sally” Langdon, while on a summer vacation back home in Plymouth. After a whirlwind romance, Sally flew to Hawaii where Bob had started the first computer data processing company, Computab, and they were married on November 8, 1963.

During their 43 wonderful years, they traveled often, enjoyed card playing, and entertaining and were often thought of as the “fun house on the block.” As an accountant, Bob often enjoyed the process of hearing Sally’s recounting of the monthly household expenses and only “pretended” to get upset because he thought it was fun. He credited her with being an excellent cook but knew how to pick up on the signal that her declaration of “stir fry” for dinner meant it was a day she would prefer to eat out. On November 8, 2001 they renewed their vows in the Catholic Church.

Bob’s myriad of hobbies included, but not limited to, fishing, flying his plane, building a boat that he named the “Loriline,” golfing, making golf clubs, playing cards, researching genealogy, racing cars, playing the drums, and traveling.

Bob was preceded in death by his parents, Aaron and Helen (Taber) Jones, spouse Sally Jones in 2005 and his grandson Garrett Jones in 2019. Also proceeded in death are his brothers Don “Casey” Jones, Larry Jones and sister Rosemary Listenberger.

A private mass for immediate family will be held Friday, January 8, 2021 at St. Michael Catholic Church. A larger celebration of life will occur in warmer weather.