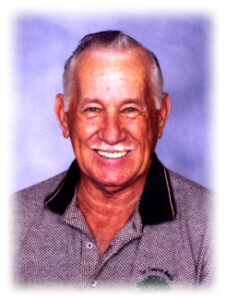 Robert F. “Bunk” Eppert Sr., 86, after becoming ill at his home, passed away at 7:23 Saturday evening in the emergency room of the St. Joseph Regional Medical – Plymouth Campus.
Robert was born in Syracuse, IN., the son of George and Rosie (Wiles) Eppert on September 8, 1925.
In 1943, he joined the United States Army and served as a Medic during WWII until his honorable discharge in 1945.
On December 14, 1968, in Bremen, Robert and Deborah L. Markley were married.
Robert worked in the transportation industry, driving trucks cross country for Bendix Trucking and was a proud member of the Teamsters Local No. 364. He retired in 1986.
An avid golfer at his age, he was often spotted at Sprig-o-mint where he had also worked. Bunk enjoyed yard work and keeping things in order. A Notre Dame and NASCAR fan, he was a member of the Bremen American Legion and V.F.W. Post, serving in the Honor Guard of their funeral unit.
Robert is survived by his wife, Debbie, Plymouth, and by five children, three daughters and two sons.
His daughters are: Nancy (Jerry) Miller, Bristol, IN, Jacqueline (Chuck) Hipsak, Las Vegas, NV, and Rosie (Michael) Weideman, Audubon, NJ. His sons are: Robert Eppert, Jr. and Richard Eppert, both of Union, MI. Thirteen grandchildren and ten great-grandchildren survive as well, together with one sister, Harriett Phend, Port Richie, FL.
Robert was preceded in death by his parents and five brothers: Millard, Kenny, Clifford, Earl and Leonard Eppert.
Visitation will be held in the Johnson-Danielson Funeral Home, 1100 N. Michigan St., Plymouth from 4 – 8 p.m. on Wednesday, March 28th.
Funeral services for Bunk will be held on Thursday, March 29th at 11 a.m. in the funeral home with the Rev. Patrick Puglisi of the Plymouth Missionary Church officiating.
Burial will follow in the Bremen Cemetery with military honors provided by members of the Bremen Post.
Memorial contributions may be made to the Bremen V.F.W./American Legion Post 1750 W. Plymouth St., Bremen, Indiana 46506 or the Marshall County Humane Society, P.O. Box 22, Plymouth, IN 46563.