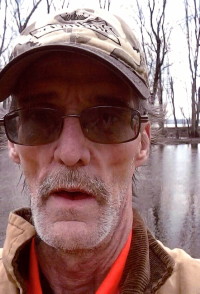 Robert F. Yeager Jr., 56, passed away at 8:57 p.m. on Friday, January 3, 2020 in his sisterâ€™s home in Bourbon.
Born on December 26, 1963, Robert was the son of Robert F. Yeager Sr. and Sandra K. (Robertson) Hjerpe. A self-employed mechanic, Robert loved working on cars. He absolutely loved fishing. He enjoyed scraping with his brother, camping and doing yard work. He loved spending time with family at cookouts and sitting around the campfire, listening to good music. Robert was also a member of the American Legion Post 385 in LaPaz.
He is survived by his daughters, Samantha (Jess) Fisher of Lakeville and Bobbie Yeager of South Bend; his grandchildren, Payten and Colten; his mother, Sandra Hjerpe of Bourbon; and his sisters: Rebecca (Dennis) Johnson of Teegarden, Regina (Jack) Elliott of Bourbon and Ramona Yeazel and Floyd Johnson of Etna Green.
Robert is also survived by his significant other, Brigitte May Thomas and her children, Autumn (Matt) McCoige and Brooke Ann (fiance Johnnie) Thomas and granddaughter, Olivia May McCoige; good friend Jesse Philpot; and several aunts, uncles, nieces and nephews.
He was preceded in death by his father, Robert Yeager Sr. â€œIcemanâ€ and great-nephew, Alex Cabalero.
Family services will be held at a later date.