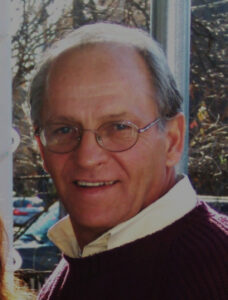 Robert Duane Hindman, 66, of 801 S. Second St., Plymouth, died at home at 11:12 pm on Saturday August 13, 2011. Born in Plymouth, IN on November 9th, 1944, Robert was the son of Elson ‘Babe’ and Louise Hindman. He graduated in 1963 from Plymouth High School.
In 1971, he married his lifelong best friend Linda Krieg Hindman. They met when they were 11 and married in October of 1971. After 18 years of marriage and 3 daughters, they went their separate ways, but remained very close friends. Linda had been his caregiver for the past 2 years. Known as Bob by everyone, he had many different careers throughout his life and lived in many different places throughout the country. He had his own plumbing business, was a horse breeder, and farmer in Wheatland, WY, where he lived for 7 years. In 1977, he moved to Stroud, OK where he trained race horses and was also a farrier. After being there for 11 years, he lived in Oklahoma City, OK and continued being a farrier. In 1994, he moved to South Bend, IN and worked in the construction business for 3 years. He then took some time off and traveled to Taos, New Mexico and ended up staying for a year. He ended up in Texas (many, many different cities) doing construction then being a new home salesman. He retired in April 2007.
Bob enjoyed flying his plane, the casino, antiquing, reading westerns, eating cheeseburgers, writing poetry, restoring old cars, spending time with his daughters, and most of all, telling stories. Bob had a way with words that would keep you captivated as if you were watching a movie. Wherever he went, he knew somebody. He was the type of person that would give the shirt off his back to you.
Besides his lifelong best friend, Linda Krieg Hindman, Robert is survived by his 3 daughters; Sarah Hindman-Roberts and her husband Brett of Bremen, IN; Emily Hindman of Waxahachie, TX; Kate Camper of Fishers, IN. Also surviving are 5 grandchildren; Anna Kuhn of Bremen, IN; Alexus and Eric Camper of Fishers, IN; Alli and Emily Roberts of Franklin, AR. 1 sister, 1 brother, and 1 sister-in-law also survive. They are Linda Hindman Querry and her husband Don of Wheatland WY, Michael Hindman and his wife Shanna of Norfolk, NE and Sandy Hindman of Muncie, IN. Several nieces, nephews, and cousins that admired his goofy and charismatic ways will miss him tremendously.
He was preceded in death by his parents and 2 brothers Leon Hindman and Harold Hindman.
A Celebration of Life will be held on Wednesday August 17, 2011 from 12 to 2 pm in the New Oakhill Cemetery Chapel.
In lieu of flowers, memorial gifts may be made to the Center for Hospice Care 112 South Center Street Plymouth, IN 46563 or the Alzheimer’s Association Greater Indiana Chapter 50 E. 91st Street, Suite 100 Indianapolis, IN 46240