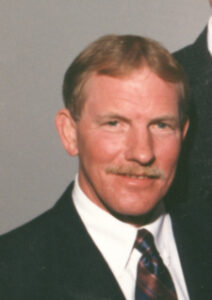 Robert E. “Bob” Kompare,Plymouth died at 8:20 p.m. on Monday, January 22, 2007, in Saint Joseph Regional Medical Center, Plymouth.
Bob, 55, died after a brief but courageous battle with cancer.
He was born in Evergreen Park, Illinois, on August 6, 1951, the son of Robert J. and Norma Eileen Swanson Kompare.
He attended Boone Grove High School in Boone Grove, Indiana, graduating in 1969, and went on to study at Purdue University.
He served his country as a member of the United States Navy, receiving his honorable discharge in 1972.
On April 12, 1975, in Chicago, Illinois, Bob and Anne Marie T. McCarthy were married.
He worked as an electrician for A.M. General.
A devoted Chicago Bears fan, Bob was an outdoors man. Among his favorite pursuits was drag racing.
Bob is survived by his wife, Anne, Plymouth, and by their two sons: Ryan E. Kompare, Koontz Lake, Indiana, and Daniel J. Kompare, Greenwood, Indiana.
A granddaughter Cayleigh A. Kompare, Koontz Lake, Indiana, survives as well.
A sister and brother-in-law, Deborah and Robert Hillegonds, Monroe, Georgia, and their three children, David, Kimberly and Katherine, also survive, together with a brother, John Kompare, Dubuque, Iowa. He is also survived by many close friends.
Bob was preceded in death by his parents and by a brother, Gregory Kompare.
Friends will be welcomed to share memories and good times with Bob’s family at the Johnson-Danielson Funeral Home, 1100 N. Michigan St., Plymouth, from 3 to 7 p.m. on Saturday, January 27, 2007.
Funeral services, officiated by Father William Kummer, pastor of St. Michael’s Catholic Church, where Bob was a member, will be held in the funeral home following visitation at 7 p.m.
Memorial gifts may be made in Bob’s name to the Marshall County Humane Society.