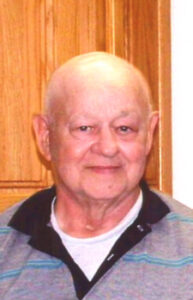 Robert L. (Bob) Jones, 82, of 11th Road passed away at 9:45 pm on Wednesday, November 28, 2007 in the Catherine Kasper Life Center, Donaldson, Indiana
Bob was a life time resident of Marshall County. Robert was born May 6, 1925 to Theron and Clara Hovis Jones in Donaldson, Indiana. He was drafted out of West High School by the United States Army. He served his country proud in World War II attaining the rank of Staff Sergeant. After his return home from service for his country he took a job with McCords of Plymouth, Indiana and later becoming Indiana Heat Transfer. He worked there for 52 years retiring as a die setter. On January 21, 1948 in Donaldson, Indiana Robert was married to Helen Ganshorn. Bob is survived by his wife and four children they are; Patricia and Phil Nelson, Orange, California and their children Jennifer and Dru. Rick and Pam Jones of Plymouth, Indiana and their children, Kristi and Tim, Cindy and Steve Fishburn of Rochester and their children, Dawn, Don and Derik. Janet Willyerd, of Plymouth and her children, Steve, Shana, and Jeremy. Bob is also survived by 10 great grandchildren.
Also surviving Bob are two brothers and a sister, Charles and Joyce Jones, Plymouth, Ralph Jones, Donaldson, Indiana and Lucille Wooley, Warren, Ohio.
Bob was preceded in death by his parents and a sister, Thelma Baxter.
Friends are invited to celebrate Bob’s life with his family on Saturday December 1, 2007 from 5 to 8 p.m. in the Johnson-Danielson Funeral Home, 1100 North Michigan Street Plymouth.
Funeral Services for Bob will be a private family service held at a later date.
Burial will take place in the New Oakhill Cemetery, Plymouth, Indiana.
Memorial gifts in Bob’s memory may be made to the Center for Hospice and Palliative Care.